Deborah Thelwell from Phoenix, Arizona, named the grand prize winner of an Alaska cruise, along with nine runners-up from across the United States

SEATTLE, April 15, 2022 /PRNewswire/ -- On Valentine's Day 2022 Holland America Line launched a "Love Letters to Alaska" contest in celebration of its upcoming 75th anniversary season in the Great Land. More than 40,000 hopefuls submitted a personal letter professing their love for Alaska or why they would like to visit. 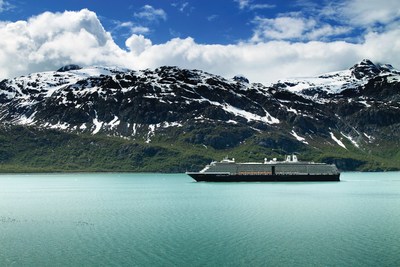 More than 40,000 hopefuls submitted a personal letter professing their love for Alaska or why they would like to visit.

After narrowing down the entries to the top 10, Deborah Thelwell from Phoenix, Arizona, was named the grand prize winner of a seven-day Holland America Line Alaska cruise for two in a Neptune Suite.

"The number of entries we received was overwhelming in the most incredible way, with thousands of people professing their love for Alaska with creative, beautiful and heartfelt notes," said Beth Bodensteiner, senior vice president and chief commercial officer, Holland America Line. "Choosing the 10 winners was difficult because so many were worthy, but in the end, Deborah's poem captured the essence of the contest with an entry that was beautifully written as a tribute to both her late husband and Alaska."

Selected as the best of the best by a panel of judges who have a connection to Alaska, Washington state or the cruise line, Deborah's entry was penned to honor her husband Alan who passed before they were able to take their dream cruise to Alaska.

"My love letter is for my late husband. We had planned an Alaska cruise for our retirement, but alas, he died from complications of dementia at age 57," wrote Deborah to introduce her heartfelt poem:

"Your love of the sea, your love of me/ My love of you, so strong and true/ Our dreams once dreamed, but now, it seems, I must sail on alone/ To see the glaciers caress the land/ The rivers, entwined, like lovers' arms as they make their way to the sea/ The mountains, bursting onto the horizon/ Joyfully stretching to the sky, as we once reached for each other," reads an excerpt from Deborah's entry.

In addition to Deborah, nine runners-up come from across the United States, including Arkansas, Georgia, Ohio, South Dakota, Tennessee, Utah and Washington state. Each submitted a poem, sonnet, letter or tribute professing their love and admiration for The Last Frontier. As a winner, they each will receive a seven-day Alaska cruise for two in a Vista or Signature Suite.

Experience Alaska with the Experts
In 2022 six Holland America Line ships will explore Alaska, either roundtrip from Seattle, Washington; roundtrip from Vancouver, Canada; or between Whittier, Alaska, and Vancouver. The ships deliver a premium experience designed for immersive cruising with wraparound decks and an abundance of verandah staterooms that bring guests closer to Alaska's natural wonders.

For explorers who want to travel farther, 16 different Cruisetours combine an Alaska cruise with an inland exploration of Denali National Park or to the unspoiled reaches of Canada's Yukon Territory. Holland America Line owns its motorcoaches, railcars and hotels, so schedules are preferential. Each Cruisetour gets a scenic ride on the luxury-domed McKinley Explorer, including select itineraries that offer Direct-to-Denali service, taking guests from their ship to their Denali hotel room on the same day.

Holland America Line Immerses Guests in Alaska with 'Alaska Up Close'
Through authentic experiences on board and ashore that focus on culture, cuisine and immersive adventures, "Alaska Up Close" enables guests to discover, taste and experience the real Alaska in a way that only Holland America Line can deliver. Alaska Up Close features local experts and personalities leading workshops and lectures, Explorations Central (EXC) Talks revealing the stories of real Alaskans, tours highlighting the best of each destination, Port to Table culinary immersion and local cuisine served at dining venues throughout the ship.

Alaska cruise pricing starts at a "Have it All" premium package rate of $749 per person, double occupancy for a seven-day sailing, which includes one shore excursion, a Signature Beverage Package, one night specialty dining and Wi-Fi. Cruise-only standard fares start at $499 per person, double occupancy. Taxes, fees and port expenses are additional. Many Alaska departures through 2022 also feature free or reduced fares for kids when sailing as a third or fourth guest in the same stateroom.

Editors note: All 10 entries and photos are available at https://www.cruiseimagelibrary.com/c/hqjmz0q3.

About Holland America Line [a division of Carnival Corporation and plc (NYSE: CCL) and (NYSE: CUK)]
Holland America Line has been exploring the world since 1873 and was the first cruise line to offer adventures to Alaska and the Yukon nearly 75 years ago. Its fleet of premium ships visits nearly 400 ports in 114 countries around the world, offering an ideal mid-sized ship experience. A third Pinnacle-class ship, Rotterdam, joined the fleet in July 2021.