Washington Puts the Red (Raspberries) in Red, White and Blue

How to celebrate Washington Red Raspberry Harvest Month this July

LYNDEN, Wash., June 29, 2022 /PRNewswire/ -- As the Fourth of July approaches, farmers in Whatcom County are hustling to harvest a significantly larger crop of red raspberries than they saw after last year's record heat – and they are calling on residents across the state to celebrate Washington's status as America's top producer of frozen raspberries. 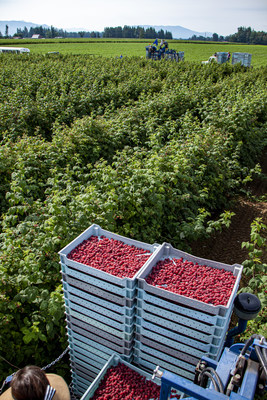 "Most people even here in Washington don't know that about 90 percent of the frozen raspberries produced in the U.S. are grown right here in our state," said Henry Bierlink, executive director of the Washington Red Raspberry Commission (WRRC). "This July, we're calling for a statewide celebration of Washington red raspberries, which are intensely flavorful, packed with nutrients and harvested in a very short window of time. These delicious berries are frozen within hours of being harvested for enjoyment year-round here in Washington and across America."

From the Northwest Raspberry Festival to special product offerings at Macrina Bakery in Seattle to Rubicon Bakers Vegan Lemon Raspberry Cupcakes in Kroger stores nationwide, there are many ways to celebrate Washington Red Raspberry Harvest Month this year.

The Northwest Raspberry Festival will take place for the first time since the pandemic began. On July 15-16 in Lynden, festivalgoers can enjoy live music, great food and drinks, a lively three-on-three basketball game, and of course, raspberries and raspberry-forward dishes. Representatives from the WRRC will be available to talk about the raspberry industry. Bakers from Macrina Bakery will join them on Friday afternoon with delicious samples, followed by samples from Rubicon Bakers on Saturday morning.

In May, the WRRC and Rubicon Bakers announced the nationwide launch of the Vegan Lemon Raspberry Cupcake, which features Washington red raspberries, in Kroger stores. The WRRC is donating $1 to FareStart for every package of cupcakes sold, up to $10,000. FareStart is a non-profit organization based in Seattle, Wash. that transforms lives, disrupts cycles of poverty, and nourishes communities through food, life skills and job training. FareStart's work is in line with Rubicon Bakers' social mission to provide opportunities for those with significant barriers to employment.

Throughout the summer, the WRRC is also partnering with baking bloggers and influencers to promote using frozen Washington red raspberries in baking. As part of the promotion, the WRRC is hosting the #RazzYourBaking Challenge on Instagram, encouraging consumers to bake with frozen Washington red raspberries and share their creations for a chance to win $500. Visit redrazz.org/razzyourbaking for complete details on how to enter and to download a comprehensive baking toolkit for home bakers.

ABOUT THE WASHINGTON RED RASPBERRY COMMISSION

In the cool, marine climate of the Pacific Northwest, Washington produces approximately 90% of the nation's frozen red raspberry crop. By freezing raspberries within hours of being picked at the peak of ripeness, Washington raspberry producers preserve the fruit's integrity, flavor and nutritional value, so you can enjoy this delicious and nutritious fruit year-round. The Washington Red Raspberry Commission (WRRC), funded by Washington red raspberry growers, supports and promotes the industry. Learn more at redrazz.org.