WICHITA, Kan., June 29, 2022 /PRNewswire/ -- Fast-casual restaurant concept Freddy's Frozen Custard & Steakburgers® announced today the brand's plans to further expand its Texas footprint with 57 new locations added to its development pipeline. The stores are set to be built throughout the state in markets that include Dallas/Fort Worth and several counties in both East and West Texas. This announcement comes on the heels of the brand's debut in North and South Dakota and adds to the development success attained since the beginning of the year. 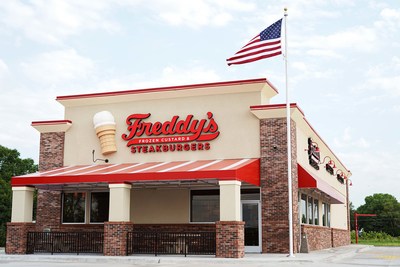 As part of its overall franchise growth strategy, Freddy's continues to identify Texas as a key state for development. The brand's ongoing expansion in the region reinforces how its unique position in the quick-service segment, and strong unit-level economics, create a promising business opportunity for multi-unit franchisees interested in adding a leading franchise concept to their portfolios.

"Our 63 operating locations in Texas have continued to perform exceptionally well, and we have witnessed firsthand how Freddy's resonates with the local communities across the state. This proven success has attracted best-in-class franchisees to join our network, and we couldn't be more excited," said Andrew Thengvall, Chief Development Officer at Freddy's. "These strong operators deeply understand their territories and share our commitment to bringing Freddy's craveable menu to the  people of Texas."

To accelerate development in Texas, Freddy's is partnering with the following franchisees:

Freddy's has added 80 new units to its development pipeline since the start of 2022, and the brand is projected to open over 40 total locations across the country. Additionally, to continue its growth with non-traditional formats, Freddy's opened its first airport location in the Will Rogers World Airport in Oklahoma City. These efforts, coupled with the brand's exceptional commitment to its franchisees, Team Members and one-of-a-kind Freddy's Guest experience, help support its greater development goal to double its footprint within the next four years, bringing the total unit count to 800 by 2026.

Franchise opportunities remain in areas across the U.S., including the Northeast, Upper Midwest, California, Florida, Oregon, and Washington and large metro areas such as Pittsburgh and many of its surrounding markets. For more information about development opportunities, contact Mary Coots, Director of Franchise Development, at maryc@freddysusa.com or 316-719-7854, or visit https://freddysfranchising.com.

About Freddy's
Freddy's Frozen Custard & Steakburgers is a leading fast-casual franchise concept with more than 440 locations across 36 states nationwide. Founded in Wichita, Kansas, in 2002, the brand offers a unique combination of cooked-to-order steakburgers, all-beef hot dogs, shoestring fries and other savory items along with freshly churned frozen custard treats. Known for operating the Freddy's Way, Guests experience genuine hospitality and food prepared fresh with premium ingredients. This signature approach has fueled Freddy's ongoing growth throughout the U.S. and garnered national recognition from industry-leading rankings, including being named No. 1 on Forbes Best Franchises to Buy and No. 59 on Entrepreneur's Franchise 500. For more on Freddy's, visit the Newsroom and follow us on Facebook, Twitter, and Instagram. For more information about development opportunities, visit https://freddysfranchising.com/.