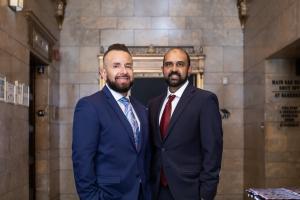 We hope we have a positive impact with every single client we meet... After we’re done with their case, we want the client to feel we worked 110 percent on their behalf and took care of them.”
— Vineet Dubey, co-founder of Custodio & Dubey LLP
LOS ANGELES, CALIFORNIA, UNITED STATES, October 24, 2022 /EINPresswire.com/ -- Personal injury law firm Custodio & Dubey LLP today marks its 10-year anniversary, though the firm’s roots stretch all the way back to when partners and co-founders Miguel Custodio and Vineet Dubey were classmates at UCLA Law.

Working together since 2012, Custodio and Dubey built a reputation as a tenacious, attentive firm with the experience and resources to handle every case with an unwavering focus on the client’s best interest.

Their dynamic approach has brought justice to hundreds of clients, compelled manufacturers and retailers clean up thousands of dangerous or cancer-causing products, and resulted in nearly $100 million in settlements. These results are also reflected in firm’s continuing growth, which in 2021 required moving their growing staff into spacious new offices on the 25th floor of Union Bank Plaza in downtown Los Angeles.

That’s a long way from when Custodio and Dubey shared a small Pasadena office when they first created their firm.
At first, the friends followed different paths upon finishing law school, with Custodio venturing into family law and Dubey focusing on plaintiff civil law. As time went by their conversations included sharing their experiences with cases, asking each other’s advice and bouncing ideas off one another.

“After becoming a lawyer I often was approached by friends and acquaintances asking if I took on civil cases,” Custodio said. Because he was focusing on family law at the time, he’d bring Dubey in on the case and they’d work them together.

After a few years it was only natural to officially join forces, and Custodio & Dubey was formed. They share the same philosophy, both believe their calling in the law is to help the regular person — the “little guy” — get justice when harmed by corporations or institutions.

That’s at the heart of Custodio and Dubey’s practice. Both men are sons of immigrants — Custodio’s parents came from Guatemala, Dubey’s from India — and grew up witnessing structural inequality, whether it was in Custodio’s Los Angeles’ Boyle Heights or Dubey’s small town of Clinton, Mississippi.

Both are committed to help provide justice and opportunities for people who might otherwise be overlooked, left out, or intimidated by the legal system, giving them the best representation possible.

“We hope we have a positive impact with every single client we meet,” Dubey said. “And when the client leaves us after we’re done with their case, we want the client to feel we worked 110 percent on their behalf and took care of them.”

Today, Custodio focuses on personal injury and wrongful death cases, working with hundreds of accident victims and their families over the years.

“Many times accident victims want to put on a brave face and power through treatment. They can feel that bringing the matter to court and fighting with insurance companies will make no difference and delay them from putting their lives back together,” he said.

Finding the right lawyers makes a difference. “When a client comes to us, it’s not the accident we focus on. It’s the person. We want to make sure they are going to be taken care of now, and in the future. We’re here to help find a doctor, to arrange transportation, to get advice on how to deal with hospital bills and expenses, anything they need after a serious accident,” he said.

Environmental law is the heart of Dubey’s practice, where he goes after companies selling harmful, unsafe and cancer-causing products.

“I have two little boys and nothing is more important to me than ensuring their healthy development and that they grow up with clean water, foods that don’t contain lead, and clothing that isn’t steeped in chemicals that can affect them the rest of their lives,” he said. “It’s uncommon to smoke cigarettes around children any more, but parents still unwittingly surround them with clothing and toys containing PFAS and phthalates, or feed them foods containing more lead than what’s even considered acceptable for adults.”

Over the past 10 years, Dubey has taken hundreds of manufacturers and retailers to court and resulted in thousands of dangerous products being taken off store shelves or reformulated. This has helped consumers throughout California.

In addition to their client work, the Custodio & Dubey recently entered an ongoing partnership with Guiding Eyes for the Blind, a non-profit organization dedicated to providing the visually impaired with a four-legged friend to guide them. And they are currently developing a scholarship program for underrepresented kids in high school and at their alma mater, UCLA.

The partners already have their sights fixed on the next 10 years. “Every day we’re working to become one of the best personal injury firms in the country,” Dubey said. “Not necessarily the biggest, but the best in serving our clients, treating them with respect and care, winning just verdicts and settlements, and always being there for them.”

The pair promise to continue to provide quality representation and justice for people injured in accidents, and their families, and to keep fighting to make food and products safer and less toxic for all Californians.