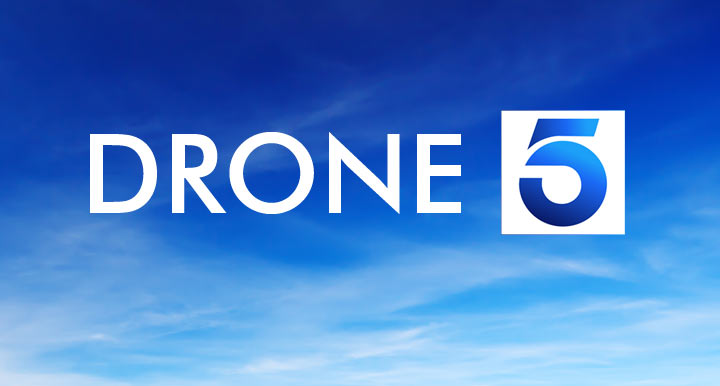 Got a guess for a “Where is Drone 5?” giveaway?  Send an e-mail to drone5@ktla.com with your guess at the correct location of Drone 5, as shown on the air on KTLA 5.  The first e-mail we receive with the correct answer will receive a KTLA 5 swag pack.  Complete details and official rules are below.  Good luck!

NO PURCHASE OR PAYMENT OF ANY KIND IS NECESSSARY TO ENTER OR WIN. A PURCHASE WILL NOT INCREASE YOUR CHANCES OF WINNING.

CONTEST DATES
From time to time, KTLA-TV will announce a “Drone 5” contest on the air. Unless the contest is governed by a separate set of official rules, each contest begins the moment it is announced on KTLA-TV for the first time, and ends when the winner is announced on KTLA-TV, Channel 5, or two hours after the original contest announcement, whichever comes first.

The computer clock of Sponsor’s webmaster is the official timekeeping device of the contest.

HOW TO ENTER
When a “Drone 5” contest is announced on KTLA-TV, Channel 5, it will be accompanied by a question posed to the viewing audience, asking what location is being shown by the Drone 5 aerial vehicle. To enter, send a response to the question posed in the contest announcement via e-mail to drone5@ktla.com, with your answer in the body of the message. You must have a valid e-mail account in order for your entry to be eligible. Incomplete entries will be disqualified. Copies or other mechanical reproductions, facsimiles, entries containing technical or electronic reproductions, entries containing attached files are not eligible and will be rejected. In the event of a dispute regarding the identity of an entrant, the holder of the e-mail account will be deemed the person who submitted the entry. Received entries become the exclusive property of Sponsor and will not be returned or acknowledged. Limit one entry per person/e-mail address and per household. Multiple entries from the same person, email address, or household will be disqualified if discovered by Sponsor. Sponsor is not responsible for entries that are lost, late, misaddressed or misdirected due to technical or computer failures, errors or data loss of any kind, lost or unavailable internet connections, or failed incomplete, garbled or deleted computer or networks transmissions, inability to access the website or online service, or any other technical error or malfunction. Sponsor reserves the right to delay any contest announcement or not make a contest announcement if breaking news or other unanticipated events prevent the announcement from occurring as scheduled. If such changes occur, they will be posted on the Sponsor’s contest website.

ELIGIBILITY
This contest is void where prohibited by law and outside the contest area set forth below. This contest is open only to legal residents of California and Nevada who reside within the counties of Los Angeles, Orange, San Bernardino, Riverside, Ventura, Kern and Inyo in California, and Esmeralda County, Nevada, who are age 18 or older as of the announcement of each individual contest, and who have not won any other prize from KTLA within the 60 days preceding the announced contest. Employees of other media companies (including television and radio), Sponsor and its parent corporation, subsidiaries, or affiliates, and such employees’ immediate family or household members are not eligible to enter or win the contest.

WINNER SELECTION, NOTIFICATION AND VERIFICATION
For each contest, the first entry received at the drone5@ktla.com e-mail account that contains the correct answer to the question posed in the original contest announcement will be declared the winner. Sponsor will determine in its sole discretion whether an entrant has correctly identified the location is being shown by the Drone 5 aerial vehicle. Sponsor will attempt to contact the potential winner by e-mail.

If the selected winner is not eligible, declines the prize, does not provide required identification or sign and return required documents by the deadlines established by Sponsor, or does not respond within 48 hours of the initial notification attempt, Sponsor reserves the right to disqualify the winner. No alternates will be selected in these contests.

Each winner will receive:

The approximate retail value of each prize is $60. All federal, state, and local taxes associated with the prize, as well as all other costs or expenses involved in or associated with the prize not specifically listed above, including any incidental travels or costs or amenities not set forth explicitly above or in the announcement of the contest on KTLA-TV, are the responsibility of the winner.

Prizes are awarded “as is” with no warranty or guarantee, either express or implied, by Sponsor. Any and all questions or disputes regarding selection of winners must be directed to KTLA-TV.

THE WINNER MAY BE REQUIRED TO PICK UP THE PRIZE IN PERSON AT KTLA-TV, 5800 SUNSET BLVD, LOS ANGELES, CA, 90028 BY NO LATER THAN TWO WEEKS AFTER THE INITIAL NOTIFICATION ATTEMPT.

The winner may be required to present valid identification and may be required to sign a Statement of Eligibility and Liability and Publicity Release by the deadline established by Sponsor in order to receive the prize. Winners will be sent a 1099 tax form reflecting the actual value of any prize that is $600 or more. Properly claimed prize will be awarded provided Sponsor receives a qualifying entry.

GENERAL CONDITIONS
If for any reason, the e-mail portion of this contest is not capable of running as planned, including infection by computer virus, tampering, fraud, technical failure, or any other cause which corrupts or threatens the administration, security or integrity of the contest, Sponsor reserves the right, in its sole discretion, to terminate or suspend the contest or any portion of the contest. If Sponsor terminates the contest, Sponsor will announce the termination on air. Information submitted in entries, including entrant’s phone number, name, address, e-mail address, etc., may be used by KTLA-TV for marketing or promotional purposes. Sponsor reserves the right to prohibit any entrant from participating in the Contest if, at its sole discretion, Sponsor finds such entrant to be tampering with the entry process or if such individual repeatedly shows a disregard for, or attempts to circumvent, these Official Rules, or acts: (a) in a manner the Sponsor determines to be not fair or equitable; (b) with an intent to annoy, threaten or harass any other entrant or Sponsor; or (c) in any other disruptive manner. If a dispute arises regarding compliance with these Official Rules, Sponsor may consider, in its sole discretion, data reasonably available to Sponsor through information technology systems in Sponsor’s control, but Sponsor will not be obligated to consider any data or other information collected from any other source.

By entering the contest, entrants agree that: (a) any and all disputes, claims, and causes of action arising out of or connected with the contest, or prize awarded, will be resolved individually, without resort to any form of class action; (b) any and all claims, judgments and awards will be limited to actual out-of-pocket costs incurred, including costs associated with entering the contest but in no event attorneys’ fees; and (c) under no circumstances will any entrant be permitted to obtain any award for, and entrant hereby waives all rights to claim punitive, incidental or consequential damages and any and all rights to have damages multiplied or otherwise increased and any other damages, other than for actual out-of-pocket expenses. Some jurisdictions do not allow for limitations on the ability to pursue class action remedies, or certain kinds of damages, and so these limitations may not apply to you. All issues and questions concerning the construction, validity, interpretation and enforceability of these Official Rules, or the rights and obligations of entrants and Sponsor in connection with this contest will be governed by and construed in accordance with the laws of the State of California, without giving effect to any choice of law or conflict of law rules or provisions. Venue for any action concerning the contest or these Official Rules will be in the courts located in Los Angeles County, California.
By participating in a KTLA-TV “Drone 5” contest, you agree to have your name, photograph, voice, biographical information, and likeness used in any and all media for promotional purposes by Sponsor relating to this contest or future similar contest without further compensation or notice, except as prohibited by law.

By participating in a KTLA-TV “Drone 5” contest, you represent that you agree to be bound by these Official Rules and the decisions of the judges. By participating in this contest, entrants agree to release and hold harmless Sponsor, its parent corporations, subsidiaries, and affiliates, and the officers, directors, agents, and employees of all such companies from any and all damages, injuries, claims, causes of action, or losses of any kind resulting from entrants’ participation in this contest, and/or entrants’ acceptance, possession, use, or misuse of the prize and any travel related thereto, including without limitation, personal injury, death, property damage, defamation, infringement of intellectual property rights, and claims based on the rights of publicity and privacy.

For a copy of the Official Rules or the name of the winner, send a self-addressed envelope along with a letter detailing your request (including the date of the contest about which you are inquiring) to “Drone 5 Contests”, KTLA-TV, Attn: Creative Services, 5800 Sunset Boulevard, Los Angeles, California 90028. Winner’s name will be available after the winner has been verified and the prize has been awarded.

You Could Win A Fabulous “Friends” Swag Pack!

Spend time with Friends on the "Friends with Friends" podcast. Join Jason, Jackie and Vanessa as they recap all two-hundred thirty-six episodes of everyone's favorite comedy. Plus, when you listen to any of the first 3 episodes, you'll have a chance to win a package of cool Friends swag, including all 10 seasons on Blu-Ray! Subscribe today on Apple Podcasts, Spotify, or wherever you download your podcasts. And don’t forget to catch Friends every weeknight at 11:30 on KTLA 5.

You could win an authentic LAFC jersey

Southern California Toyota Dealers make it easy for you to keep up with your favorite team. Text LAFC to 515151 for your chance to win an authentic LAFC jersey. Message and data rates apply.

Or enter using the form below:

Controversial encounters between police and protesters in L.A. caught on camera

Controversial encounters between police and protesters in L.A. caught on camera

Some sweepstakes pages will remain active on ktla.com for 30 days after the end of the giveaway for disclosure purposes.
× Close Ad