Forgive me since I’m a little incensed right now.

I’m shocked over a YouTube video I just watched which shows a dad “testing” the limits of his Tesla’s Autopilot feature – USING HIS TODDLER! That’s right, he stuck his kid in front of the car to see if the sensors would detect him and stop the vehicle. It all starts about 9:55 in.

There will be no parent of the year award for this one… in fact, I would even go as far as to say he’s putting his child in danger.

I say this because in my years of tech reporting, I have been in several prototype self driving, autonomous cars and cars with pre-collision and pedestrian detection systems. These cars are all designed to automatically apply the brakes if you don’t stop for an object or human.

In every single case, engineers never use actual people to test these features out. Even under the most controlled conditions something can go wrong, which is why you just don’t do it. At a Toyota test course we used a dummy named Elvis which was activated by strings. 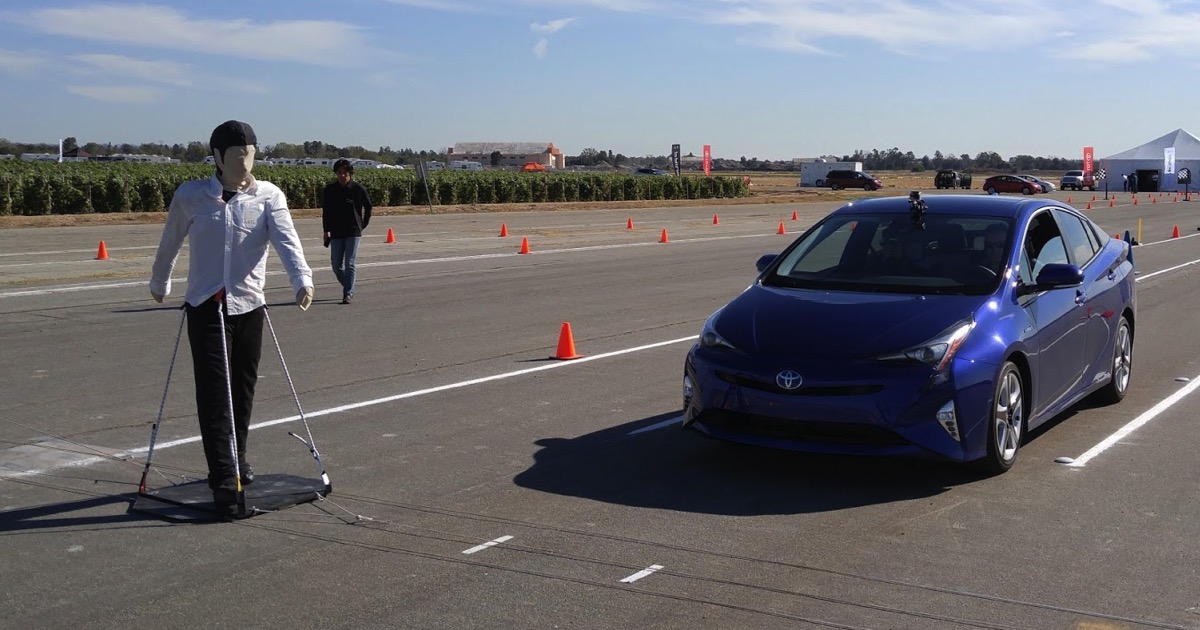 In the video, the man tests several different objects including a stuffed animal (which doesn’t stop the car), a 5 gallon bucket, himself and eventually his kid.

“Hey Gene, come here,” the dad says to his child playing off screen.

“No,” is the child’s response.

The dad goes to collect the child and then places him in front of the Tesla: “Stand right here, smile for the camera.”

The child isn’t having it and says “I want to play,” to which the dad responds “Now say your prayers, Rabbit.”

The dad activates the self driving mode on the car and it begins to creep towards the child. The kid does what any normal kid would do – he starts to get out of the way. The dad yells “Don’t move, Don’t move!”

The problem here is that we don’t know what the child’s movements could do to the sensors in the car. What if it lurched forward, or stopped seeing him at all? It’s just about the dumbest thing I’ve seen someone willingly do on camera in a long time.

The video’s poster seems to know – now there is a big info card on the video saying how the child was off to the side and the dad and a friend had a fob and app ready to press the stop button in case something went wrong. But we all know how easily technology can fail. I wouldn’t be surprised if this video is pulled down by the time you read this.

Here’s the full text of the info card:

Just to reiterate, Geno is NOT standing in front of the car. he is standing to the SIDE of it’s path. If the car were to not stop, it would actually be quite a distance away from him, side wise, and drive right past him. This test is testing the SIDE Sonar ONLY. I’m not a idiot, I would not put my child in front of a moving vehicle, especially one with no driver. Also, during filming, 2 other people are with us, one of them has the Tesla app with the stop button ready, I also have my Fob with the stop button ready, and ready to move him out of the way at any sign of trouble!

The Samsung Galaxy S21 Ultra smartphone takes new steps forward, but at least a few back. Still, it's a major improvement over last year's model, which had focus issues. This year, the issues are mostly ironed out and the S21 Ultra is easy to recommend if you like a big phone that has every feature under the sun. Well, almost. Read on.

Travelers flying into U.S. now must test negative for coronavirus before departure