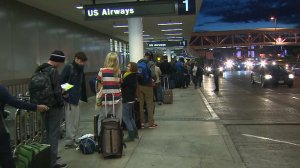 Airport police responded to multiple terminals around 8:45 p.m. Sunday following reports of an active shooter, but it was quickly determined the reports were false and no shots were fired at LAX, authorities said.  Officers responded to the false alarm in less than one minute, which led to the evacuations of five terminals, and followed with officers securing all 9 terminals in under an hour,  the Los Angeles World Airports reported.

“An initial internal review of LAX’s emergency response to the recent active-shooter false alarm reflects the benefits from Los Angeles World Airports’  significant investment in resources, training, and new equipment,” LAWA Chief Executive Officer Deborah Flint said in a news release issued on Wednesday. “Preparation and training have been a key focus for emergency-response personnel and other airport stakeholders since the Nov. 1, 2013 Terminal 3 active-shooter incident at LAX.”

On Sunday airport police confirmed no shots were fired by reviewing its upgraded closed-circuit television footage system which was increased to 2,500 cameras – including 400 new high-definition cameras inside the terminals and 150 at exterior locations – after the 2013 incident.

The Los Angeles City’s Wireless Emergency Alert system was also used for the first time on Sunday and distributed public-safety messages to all smartphones within a five-mile radius of LAX. The system was created in response to a communication gap with passengers  highlighted following the TSA officer’s death.

On Sunday new changeable message signs were also placed on the streets leading into and along the Central Terminal Area in an effort to give motorists updated information. Visual messaging and audio announcements were also broadcasted inside and outside of the terminals.

LAWA officials said response and recovery drills at LAX will continue in an effort to improve emergency preparedness.

The findings will be given to the Los Angeles Board of Airport Commissioners and Los Angeles City Council.

Tips to organize and declutter your home with Units Moving and Portable Storage Inc.

She toured with Oprah on her 2020 vision tour. The co-founder of Daybreaker and Dose, Radha Agrawal joined us live to talk about how joy practices can improve your mood. A joy practice is the most accessible movement and mindfulness practice out there, for all levels and all ages. It connects the brain with the body while stimulating your happy neurochemicals through 8 virtues of joy. For more information including how you can discover mind-body practices, you can join the community at www.dose.daybreaker.com. This segment aired on the KTLA 5 Morning News on April 16, 2021.

Despite tensions, U.S. and China agree to work together on climate change with urgency