About 20 high school swimmers from Moreno Valley were rescued from the ocean off La Jolla on Tuesday, according to the San Diego Fire-Rescue Department. 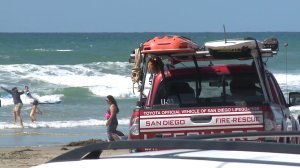 After the “first group” was rescued, more of the swimmers got cold and began panicking, putting their hands in the air to ask for help, a fire official told the station on scene.

Lifeguards brought the victims to shore on water scooters, a spokesman for the San Diego Fire-Rescue Department told KSWB.

Two students were hospitalized, while eight others were treated on scene for exposure to the cold, the station reported.

The students had been given a safety talk by lifeguards before seeking to swim to a buoy a half-mile off shore, a lifeguard lieutenant told the San Diego Union-Tribune.

Most of the group was able to return to the beach, and all of the students were accounted for after the mass rescue.

“Not only was she a champion for equality and women’s rights on the bench, she was an inspiration and a role model for women,” L.A. County Supervisor Janice Hahn said of the late Supreme Court Justice at the event.

Plaintiffs in a class-action lawsuit are seeking a temporary restraining order and injunction to limit the Los Angeles County Sheriff’s Department’s use of nonlethal force at protests, claiming it has employed rubber bullets, tear gas and other chemical agents indiscriminately against peaceful protestors, journalists and legal observers in violation of the Constitution.

The petition, filed Monday in U.S. District Court, focuses on protests in recent weeks against police brutality and the shooting of Dijon Kizzee, who was killed by sheriff’s deputies Aug. 31 in Westmont after being flagged for a vehicle code violation while riding his bike. The incident has spurred daily protests in front of the South L.A. sheriff’s station.

A 33-year-old gym owner and social justice activist embarked Monday on a 45-day bike trip across the United States.

Seth Gottesdiener is traveling from Los Angeles to Washington, D.C., hoping to understand the state of Americans in the days leading up to the 2020 election. He calls it "The Great American Bike Ride."

‘Long road to recovery’: Both deputies released from hospital after being shot in Compton ambush

Texas man who sought to kill, rape and eat child gets 40 years in federal prison: ICE