A $20,000 reward was renewed this week in connection with the unsolved killing of a 4-year-old Monrovia boy who was shot to death in Altadena nearly three years ago, officials said Friday.

Salvador “Chiquito” Esparza III died following the July 5, 2016,  shooting at the home of his mother’s boyfriend in the 300 block of Figueroa Drive, according to the Los Angeles County Sheriff’s Department.

He was standing in the doorway of the home when an unidentified attacker opened fire, striking him in the head, officials said. A 27-year-old man was also wounded in the shooting.

Espzarza died hours later at a hospital, according to Los Angeles County Department of Medical Examiner-Coroner’s records. An autopsy determined he died from a gunshot wound to the head.

“Salvador was an innocent victim of a gang-related incident,” Deputy Marvin Crowder of the Sheriff’s Information Bureau said.

The shooter was believed to have been involved in an argument with others at the home an hour or two prior to the gunfire, Lt. John Corina of the Sheriff’s Homicide Bureau said at the time. The intended targets were believed to be the boyfriend of Esparza’s mother and his brother.

The killer approached from Olive Street, fired at least 13 shots, ran down the street and fled in a dark-colored car, Corina said. The attacker was only described as male and black.

But the investigation continues, as does the search for justice.

“As we approach the three-year anniversary of Salvador Esparza’s death, Los Angeles County Supervisor has reinstate the reward of $20,000 for information leading to the arrest and conviction of the person(s) responsible for this tragic murder,” the Sheriff’s Department said in written statement. 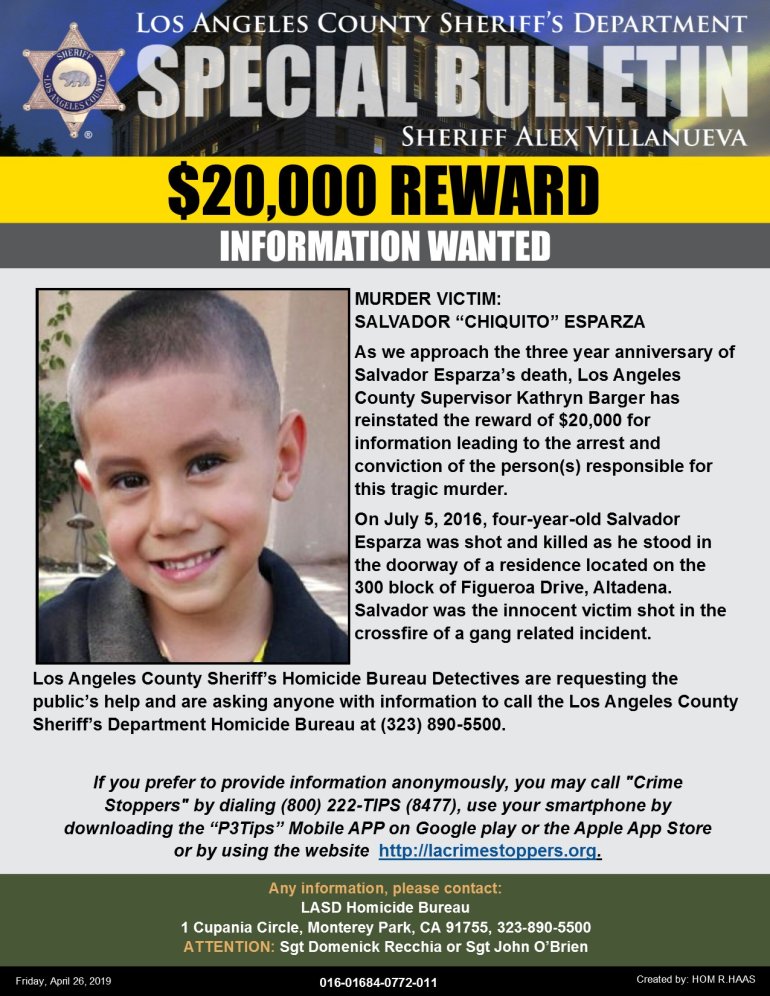 NYPD and good samaritan save man on subway tracks

Sacramento ranks among the worst for package thefts

4 CA cities among the worst for package theft: report

Hidden gems of Cyber Monday: the best discounts we …

The best gifts for 9-year-olds

4 people shot at party in Hawthorne