A search continued Saturday for three men who escaped from the Orange County Central Men’s Jail by apparently cutting through steel bars and rappelling down the side of the multistory facility, authorities said.

A search was immediately conducted at the Central Jail complex, located at 550 N. Flower St. in Santa Ana, and the adjacent Civic Center, but the inmates were not located, sheriff’s officials said in a special bulletin.

Information gathered by investigators revealed that the inmates were last seen about 5 a.m. Friday. The disappearance was confirmed about midnight, according to Hallock.

“This was clearly a well thought out and planned escape” that may have been in the works for weeks or months, the lieutenant told reporters Saturday afternoon. Evidence indicated that the escapees had cut through 1/2-inch steel bars and made their way through plumbing tunnels before gaining access to an unsecured area of the jail’s roof, he said.

Once there, they seemed to have pushed aside barbed wire, used a “makeshift rope” — possibly fashioned from sheets or clothing — to rappel to the ground, then fled the area on foot, Hallock said. It was unclear if they received any assistance from anyone outside the complex, he added.

The episode marked the third escape in the history of the maximum-security facility, which was built in the 1960s, according to the Sheriff’s Department.

The inmates had faced various charges: Tieu was held on suspicion of murder, Duong on an attempted murder charge, and Nayeri on charges of kidnapping and torture, the bulletin stated.

Nayeri and Duong were ineligible for bail, while Tieu’s had been set at $1 million, Hallock said.

The FBI has announced a reward of up to $20,000 for information leading to the prisoners’ capture.

Anyone with information about the case was urged to call the Sheriff’s Department at 714-647-7000.

Anonymous tips may also be submitted to O.C. Crime Stoppers at 855-847-6227 or via the website occrimestoppers.org. 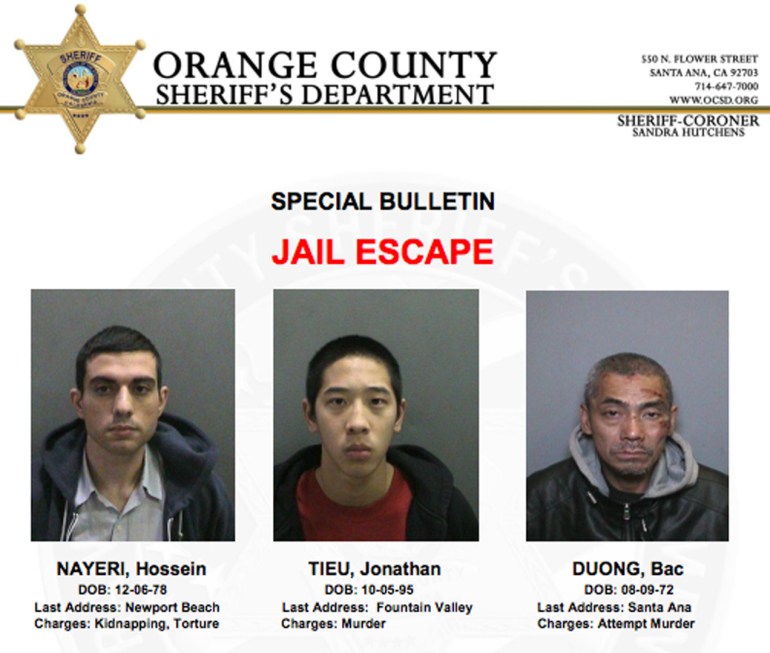 A Long Beach couple is fighting against the installation of a small cell tower outside their house, but city officials say it’s out of their hands.

The homeowners say the telecommunications industry has made it impossible for them to prevent it.

A group of about 60 people gathered in Lancaster to protest against the use of force after cellphone video captured a deputy holding a gun to the head of a man as he lay prone on the ground during an arrest.

Protestors say they want the Los Angeles County Sheriff's Department to modify the way deputies interact with the community and ask that those who violate the department policy be held accountable.

A mom who missed out on the first month of her baby’s life while battling COVID-19 in a Santa Monica hospital says this Mother’s Day will be extra special.

Natahlie Herrera was 37 weeks pregnant with her son, Felipe, when she and several other members of her family tested positive for the virus. Her condition rapidly deteriorated and she delivered the baby via cesarean section to avoid exposure, and he was taken away before she could hold him.

More than 800 turtles rescued from storm drains along Jersey Shore