Police on Friday arrested three teens suspected of killing two people and wounding 10 others in a rash of shootings in Long Beach.

Police in Long Beach said the 16- and 17-year-old gang members are suspected of carrying out seven shootings since November.

“It is unacceptable that we have 16- and 17-year-olds who are being recruited into the gang lifestyle and choosing to terrorize, injure or end the lives of others,” Police Chief Robert Luna told reporters. 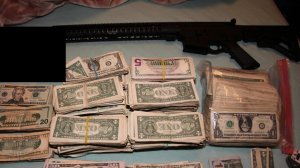 Authorities searched two dozen locations in the operation and seized five handguns, a rifle and at least three pounds of methamphetamine.

Ten adults were arrested in other crimes such as unlawful possession of a firearm, police said.

Luna declined to state the name of the gang. He said the case will be referred to the district attorney’s office.

The operation was carried out with assistance from agencies including the Los Angeles County Sheriff’s Department.

#LBPD Chief Luna said, “It's unacceptable that we have juveniles who are being recruited into the gang lifestyle & choosing to terrorize/injure/end the lives."

These are samples of SM posts used to glorify the gang lifestyle, which is disturbing & must be reported to police. pic.twitter.com/M3CWziCYZ2

At least two workers at the Whole Foods 365 store in Silver Lake have been diagnosed with COVID-19, according to the company.

"Out of an abundance of caution, the store has performed a professional deep cleaning and disinfection, on top of our current enhanced sanitation measures," a spokesperson said.

The Los Angeles Fire Department had a busy Tuesday morning, extinguishing major fires in Boyle Heights, Pico-Union and Chinatown without reporting any injuries.

The first blaze erupted around 12:30 a.m. at a row of one-story commercial units in the 2200 block of First Street in Boyle Heights, according to the Fire Department.

In Mid-City, a refrigerator stands on the sidewalk outside Little Amsterdam coffee shop. This is no ordinary sidewalk fridge — dank and empty, waiting to be picked up by sanitation services — but a community fridge: cold, clean and well-stocked with food.

Behind its frosty glass door is a wheel of Cacique queso fresco, a carton of eggs, squash, kale, Lunchables and half a gallon of milk. On its side, there’s a mural of a young man eating an apple, the words “Eat to Live” etched into his curly cropped hair.