Months of road closures are planned in the area of Metro's Little Tokyo/Arts District Station as street restoration and construction continue.

Above-ground restoration began Friday, with officials warning that the road closures are expected through August as crews work to get the streets back to normal.

Work on the new underground Metro station started back in 2014, and as construction continues, crews will be removing the concrete panels that make up the temporary roadway in the area, L.A. Metro announced in a news release. 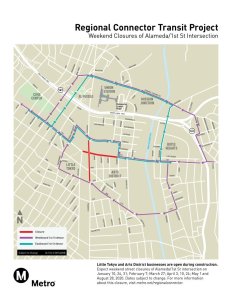 Road closures and lane reductions are planned in these areas:

Officials advised drivers to use alternate routes when traveling into downtown L.A.

During weekend street closures, LADOT DASH Line A will be rerouted in Little Tokyo and the Arts District, Metro said.

Construction is not expected to impact the Metro Gold Line.

Metro officials say the regional transit project, which is expected to be completed in 2022, will add about 17,000 new riders and save commuters at least 20 minutes since they won't have to transfer.

Ventura County has secured housing at motels in three cities to shelter the homeless population as the novel coronavirus continues spreading, infecting another 17 people there as of Monday.

Health officials have reported a total of 126 infections in the county, describing the vast majority as "active cases" — just 16 patients have recovered. Four people have died of the virus and another 28 patients had to be hospitalized at some point, officials said.

Police shot and wounded a suspect who they say first open fired on them while fleeing from the officers in Long Beach on Monday afternoon.

The gunfire took place at about 2 p.m in the 1200 block of East Leigh Court, officials said.

Earth movers crawl over huge mounds of dirt. Dump trucks creep onto Prairie Avenue, bringing traffic to a crawl. Back-up alarms beep and dust swirls as heavy equipment navigates the sprawling site where the gleaming, sail-shaped centerpiece of Inglewood is rising toward completion.

SoFi Stadium, the $5-billion future home of the NFL’s Rams and Chargers, is scheduled to open in late July with a Taylor Swift concert. And nothing, not even the coronavirus outbreak that has staggered entire industries and kept tens of millions of workers across the county at home, is stopping construction.

Wuhan, the epicenter of China’s COVID-19 outbreak, begins to reopen 2 months after lockdown

Tenants across the U.S. vow to go on rent strike to get payments waived, rather than delayed amid COVID-19 crisis

Wuhan, the epicenter of China’s COVID-19 outbreak, begins to reopen 2 months after lockdown