Authorities on Monday asked for the public’s help identifying two people believed to have been involved in a shooting at a West Covina house party that killed an 18-year-old man and injured three other teenagers last week.

The shooting happened at about 10:29 p.m. Friday on the 300 block of North Hollow Avenue at a home rented for a “nos party,” a gathering where attendees consume nitrous oxide, the Los Angeles County Sheriff’s Department said.

Deputies arrived at the scene to find Dennis Anthony Bracamonte, of La Mirada, dead in the backyard, authorities said.

Two other boys were found suffering from gunshot wounds to their legs and they were transported to a hospital, according to LASD.

A fourth victim, a girl who went on her own to the hospital, suffered injuries that were not life-threatening, the sheriff’s department said.

The newly released images show two young people, both wearing caps. One was in a T-shirt and the other in a dark hoodie and gold chains. The sheriff’s department only described them as male and Latino. Their names and ages were unknown.

It is unclear what the two people are suspected of. Authorities said they are believed to have been “involved in the shooting.”

The sheriff’s department has not provided information on how many gunmen there were during the incident.

Detectives believe there was a fistfight before the shots were fired, Sgt. Richard Biddle told KTLA.

The party drew about 40 people through social media, and when deputies arrived, they saw dozens of young people fleeing from the home, Biddle said.

No further details were immediately available.

Anyone with information was urged to contact the LASD homicide detectives at 323-90-5500. To provide information anonymously,  call Crime Stoppers at 800-222-8477. 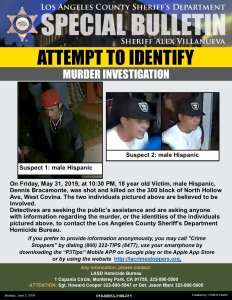 The proposed tax would hit the gains of those with more than $1 billion in assets or incomes of more than $100 million a year, and it could begin to shore up the big social services and climate change plan Biden is racing to finish before departing this week for global summits.

Parents were notified Tuesday night that 33 people at Valencia High School have tested positive for the coronavirus within the last week.

The cases were primarily within the cheerleading program, the Santa Clarita Valley Signal reported, citing an email distributed to families.

The United States has issued its first passport with an “X” gender designation — a milestone in the recognition of the rights of people who don’t identify as male or female — and expects to be able to offer the option more broadly next year, the State Department said Wednesday.

The U.S. special diplomatic envoy for LGBTQ rights, Jessica Stern, called the moves historic and celebratory, saying they bring the government documents in line with the “lived reality” that there is a wider spectrum of human sex characteristics than is reflected in the previous two designations.

‘Comeback Checks’: L.A. to give out $5,000 grants to thousands of small businesses

iPhone’s latest software update lets you add your digital vaccine card to Apple Wallet. Here’s how to do it.