Skip to content
1  of  / 2
Breaking News
Breaking News
Swarm of quakes hits near Anza; largest is magnitude 4.9: USGS
1  of  / 2
Breaking News
Watch live: L.A. Mayor Garcetti holds daily briefing on city’s coronavirus response
2  of  / 2
Live Now
Live Now
KTLA 5 Weekend Morning News
This is an archived article and the information in the article may be outdated. Please look at the time stamp on the story to see when it was last updated.

An 18-acre brush fire burned drought-stricken hillsides above the Cahuenga Pass Tuesday afternoon, sending a column of smoke towering over the Hollywood Hills.

A Los Angeles Fire Department helicopter spotted the grass fire near the northbound 101 Freeway and Cahuenga Boulevard just after 3 p.m., according to an LAFD update.

About 200 firefighters responded, and the county Fire Department assisted in the air and on the ground. Crews were being released about 5:45 p.m.

The blaze was at one point headed toward San Marcos Drive, but no homes were reported threatened.

The fire was not moving quickly and was not expected to break the perimeter, Stewart said. Containment was at about 50 percent at 5:45 p.m., and Stewart said several more hours of work remained.

Aerial video from Sky5 showed firefighters working in steep terrain that was already charred, and helicopters dropping water from the nearby Hollywood Reservoir.

The smoke from the fire was visible from across much of central Los Angeles.

No injuries were reported, no structures were damaged, and it wasn't known what caused the fire. 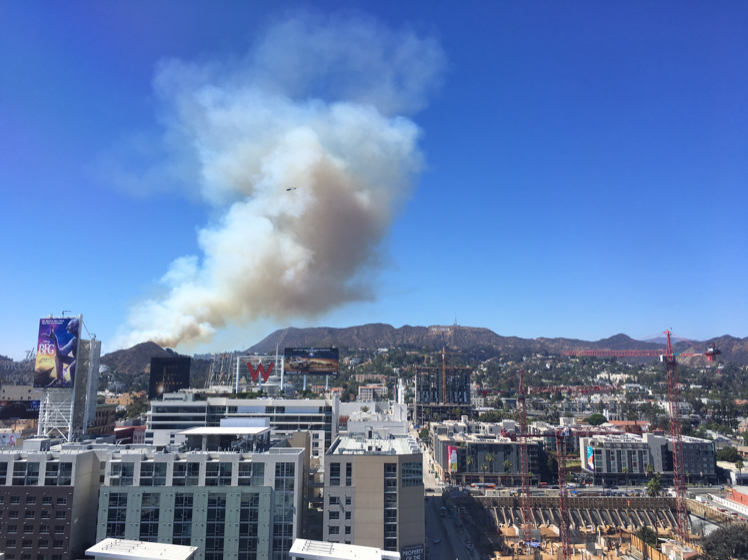 KTLA viewer Rick George submitted this photo of a fire towering over the Hollywood Hills on July 19, 2016.

A 74-year-old woman was unable to get groceries or find a store that would deliver amid the coronavirus pandemic. Then she called her local Smart and Final in Costa Mesa and was surprised to find a store manager willing to share an act of kindness.