Hundreds of city, county and federal firefighters were responding Monday to a wind-driven brush fire that burned rapidly up a canyon above Lake View Terrace and into the Angeles National Forest.

The fire was reported at 2:20 p.m. at 11326 Wheatland Ave., according to the Los Angeles Fire Department’s Erik Scott.

It burned up a ravine, being pushed by a 5-to-7-mph wind, burning in light-to-medium brush, Scott said.

By 4:15 p.m., it was 100 acres, according to the Angeles National Forest’s Twitter account, which called the incident the Wheatland Fire.

On scene early Monday evening, city fire Capt. Daniel Curry said the fire had grown to 200 acres and was not expected to be fully contained until 8 p.m. Tuesday. Scott soon said that the acreage estimate was changed to 135 acres, with a containment rate of 35 percent just before 6 p.m.

“The fire spread very rapidly due to the steep terrain and the status of the fuels in the area,” Curry said. “Also, we have a little bit of instability in the atmosphere, and that always helps spread fire more rapidly.”

The south end of the fire, closer to homes, was part of the containment line, Curry said.

The U.S. Forest Service, Los Angeles County and city fire departments were in joint command. Curry said 300 city firefighters were responding, but he couldn’t be sure of the total response because of the other two agencies involved.

The fire is burning in a “mutual threat zone” where any blaze prompts a huge, multi-agency response, Curry said.

“It’s one of the largest responses in the western United States,” he said. “We can bring a lot of resources to bear on a fire, and we’ve needed that today.”

The address given for the location where the fire was reported is for private property above a residential neighborhood at the edge of the National Forest.

Multiple helicopters and fixed-wing aircraft were responding, and ground crews appeared to be working to protect power lines that run into the mountains, aerial video from Sky5 showed.

No structures were in danger as the flames burned away from homes toward undeveloped land in the San Gabriel Mountain foothills. No evacuation orders were issued.

The South Coast Air Quality Management District issued a smoke advisory due to the possibility of unhealthy air in parts of the San Gabriel Mountains, with possible affects for sensitive individuals in the eastern San Fernando Valley and western San Gabriel Valley.

A south wind of 10 to 15 mph, with gusts of up to 20 mph, was in the forecast for the area on Monday, according to the National Weather Service.

Scott said the temperature was about 67 degrees.

Wind from the south or southwest was expected to continue overnight and into Tuesday, Curry said. Light rain may fall in the area Tuesday, he said.

No injuries were reported and no structures were damaged as of early evening Monday.

The cause of the fire was under investigation. 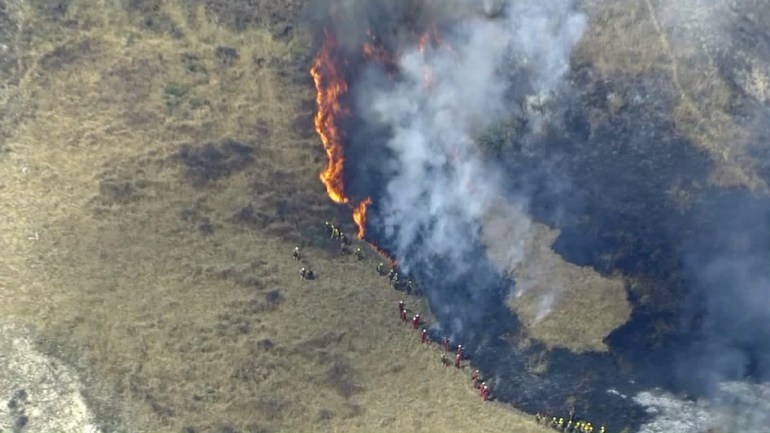 Firefighters seek to contain a brush fire burning above Lake View Terrace on May 23, 2016. (Credit: KTLA)

Kobe Bryant crash photos lawsuit to be heard by L.A. …

No one injured after small plane crashed on 91 Freeway …