A magnitude 5.3 earthquake struck near the Channel Islands early Thursday afternoon, jolting residents in the Los Angeles area and beyond as Southern California saw its largest quake in more than four years, according to the U.S. Geological Survey.

The temblor hit beneath the Pacific Ocean about 12:29 p.m., at a depth of about 10 miles beneath the surface, USGS reported. It was centered about 41 miles southwest of Ventura and 85 miles west of Los Angeles.

It was produced by offshore faults that “are part of the system that moves Southern California around a bend of the San Andreas fault,” seismologist Lucy Jones tweeted.

Jones, formerly of the USGS, described it as an earthquake of “moderate” size.

There were no immediate reports of injuries or damage, according to law enforcement and fire agencies across Southern California.

The Los Angeles Fire Department went into “earthquake mode” following the shaking, but was back in normal operation mode once a survey of the city was completed.

Shaking was felt all along the coast, from the San Luis Obispo area to the north to San Clemente in the south, USGS reported.

Many of the more than 300 day visitors and campers who were on Santa Rosa, Santa Cruz and Anacapa islands when the temblor struck reported feeling a jolt and rolling motions, according to Yvonne Menard, a spokeswoman for Channel Islands National Park.

A couple of bricks fell off a chimney structure on a Nature Conservancy property on Santa Cruz Island, but beyond that there were no injuries on any of the islands, she said. No evacuations were ordered.

On social media, people across the Southern California region also reported feeling the quake, with many describing it as “rolling.”

One woman said the quake’s “rolling motion” caused walls to creak and items to swing in Torrance.

For those working in high-rise buildings, the shaking was more intensely felt.

“It lasted about a minute and it was pretty scary,” said Gary Daugenti, who was on the 12th floor of an office building when the shaking began. “It started rolling but it got a little bit more violent as it went on, but it didn’t get to the point where it was a violent shake.”

Others described feeling the temblor from as far away as San Jacinto and central Orange County.

Some people in the Los Angeles area received about a 10-second warning before the shaking hit thanks to the state’s earthquake early warning system, according to seismologists at the California Institute of Technology.

The warning was long “enough for us to puzzle about it before the shaking hit,” Southern California Earthquake Center Director John Vidale told the Los Angeles Times.

According to Jones, a quake this large hasn’t occurred in the region in several years, a period she called “quiet.”

For perspective, the 1994 Northridge quake would have had 50 to 60 times as much energy, Jones added. 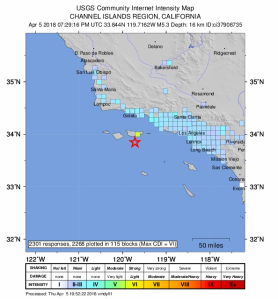 Ventura County Fire Department Capt. Steve Swindle told KTLA he was at the agency’s headquarters in Camarillo when the earthquake hit and felt it.

He said that during a tremor, officials at stations countywide put out their apparatuses and fire engines so they can be prepared to respond in the event of an aftershock. Crews drove around to assess possible damage Thursday afternoon, he said.

“So far, thankfully, there hasn’t been any damage reported out of this,” he said.

He advised residents of Ventura County to visit VCreadysetgo.org and be prepared for other incidents.

“It is Southern California, we are earthquake country. We know that it’s coming,” Swindle said. “Being prepared is always your best bet to help yourself.”

A man accused of killing eight people, six of them women of Asian descent, in shootings at three Atlanta-area massage businesses was indicted Tuesday on murder charges, and a prosecutor filed notice that she’ll also seek hate crime charges and the death penalty.

A Fulton County grand jury indicted Robert Aaron Long, 22, in the March 16 slayings of Suncha Kim, 69; Soon Chung Park, 74; Hyun Jung Grant, 51; and Yong Ae Yue, 63. The indictment only covers those four killings that happened at two spas in Atlanta, and not the attack in Cherokee County in which Xiaojie “Emily” Tan, 49; Daoyou Feng, 44; Delaina Yaun, 33; and Paul Michels, 54, were killed.

Group in O.C. protests digital COVID vaccine records that officials say are not required, meant to be convenience

Protesters gathered in Orange County on Tuesday to oppose there being digital COVID-19 vaccine records that officials have insisted are not required and are only meant to be a convenience for residents who want them.

The unmasked crowd came together outside an O.C. Board of Supervisors building in Santa Ana. They carried signs reading  “digital passports are anti-freedom” and “unmask the kids” as they stood near writing on the ground that read, “No digital slavery. No vax passport!”

The city of Long Beach is hoping to entice people who are reluctant about the COVID-19 vaccine to get the shot by offering free tickets to the Aquarium of the Pacific.

Beginning Tuesday, Long Beach will give out two free aquarium tickets to anyone who receives their first dose of the Pfizer or Moderna vaccines, or the single dose Johnson & Johnson vaccine, at any of the city-run vaccination sites. The promotion is good through this Saturday, according to a news release from the city.

‘There was a lot at stake’: Tom Cruise addresses leaked audio of COVID safety rant that went viral

Migrant children being held in mass shelters with little oversight

Group in O.C. protests digital COVID vaccine records that officials say are not required, meant to be convenience