Loved ones of a missing 15-year-old Redondo Beach girl who was last seen Wednesday with two homicide suspects held a vigil on Easter Sunday in Windsor Hills to pray for her safe return.

Alora Benitez was last spotted Wednesday morning in Torrance, in the company of her mother and a man who are suspected in the killing of a man in a Carson parking lot on Tuesday.

Jeffrey Appel, 32, of Las Vegas, was found dead in a car in the 400 block of East Carson Plaza Drive, according to Los Angeles County Sheriff’s Department and coroner’s officials.

Sheriff’s officials initially described the death as a stabbing, but later said the cause of death was unclear and would be determined by the Los Angeles County Department of Medical Examiner-Coroner

An autopsy has since determined Appel died from gunshot wounds to the neck and torso, coroner’s records show. The death was ruled a homicide.

Benitez is believed to be with her mother, Maricela Mercado, 40, and her ex-husband Roman Cerratos, 39, who have been identified by homicide detectives as suspects in Appel’s killing, sheriff’s officials said.

Authorities issued an Amber Alert Wednesday evening after realizing the girl was last seen with the suspects.

The suspects’ BMW was found in the border town of San Ysidro, investigators announced Friday. But the suspects and Benitez were nowhere to be found.

The missing girl’s father, Julian Benitez Jr., described her as, “my air and my life.”

Benitez was described as Latina, about 5 feet, 2 inches tall and about 100 pounds, with brown hair and brown eyes. 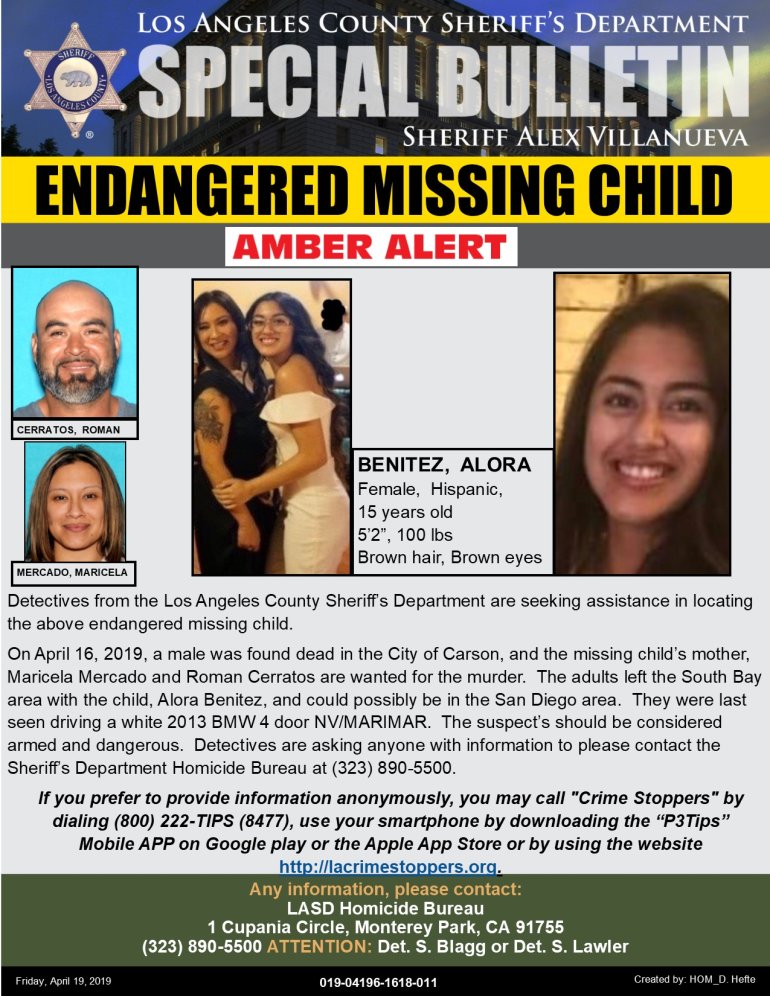 A woman killed her 18-month-old daughter before killing herself in Claremont, authorities said Wednesday.

Police responded to an apartment along the 1400 block of Morton Circle about 7 p.m. Tuesday for a welfare check after a mother and her child had not been seen or heard from for days.

Kraft pointed out that the vaccine has been used in children aged 12 to 18 already, and now, for children aged 5 to 11, shots with one-third of the standard dose are proving effective.

At least 59,000 meatpacking workers caught COVID-19 and 269 workers died when the virus tore through the industry last year, which is significantly more than previously thought, according to a new U.S. House report released Wednesday.

The meatpacking industry was one of the early epicenters of the coronavirus pandemic, with workers standing shoulder-to-shoulder along production lines. The U.S. House Select Subcommittee on the Coronavirus Crisis, which examined internal documents from five of the biggest meatpacking companies, said companies could have done more to protect their workers.

Alexa is recording you; here’s how to delete the audio from your Amazon Echo

COVID vaccine boosters: Who’s eligible, when and how to get the shot in California

iPhone’s latest software update lets you add your digital vaccine card to Apple Wallet. Here’s how to do it.

COVID vaccine boosters: Who’s eligible, when and how to get the shot in California

California stimulus checks: Why you may not have received a payment yet — or won’t at all