Fire officials were mopping up hot spots Saturday afternoon after a fast-moving blaze burned 32 acres and prompted the full closure of the northbound 5 Freeway in Castaic, officials said.

Some 115 firefighters responded to the second-alarm blaze, the Los Angeles County Fire Department tweeted around 3:12 p.m.

The fire grew to about 10 acres “with rapid rate rate ratedepartment tweeted.

It continued to grow to 32 acres before being fully contained by around 6 p.m., according to another tweet.

The fire prompted a full closure of the northbound 5 Freeway at Lake Hughes Road as well as two “lower crossover” lanes on the southbound side, the California Highway Patrol tweeted.

A fixed-wing aircraft was initially requested to help battle the blaze, but was cancelled when firefighters reported no active flames were visible. 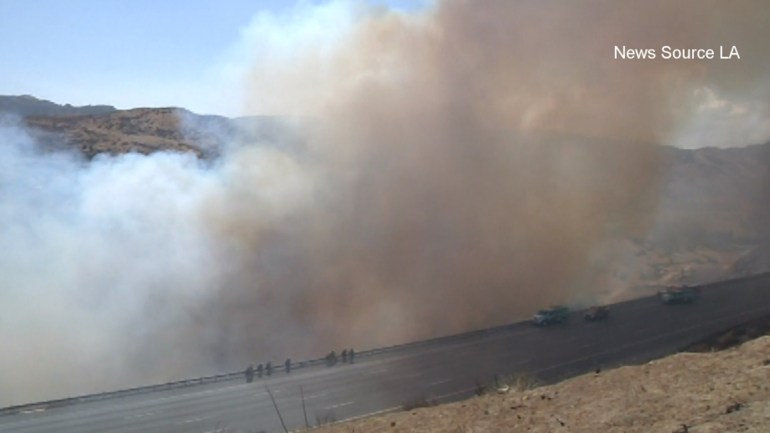 Fire officials walk across the 5 Freeway in Castaic as smoke billows from a fire on June 13, 2015. (Credit: News Source LA)

Los Angeles Mayor Eric Garcetti said he has directed the LAPD to “minimize” its use of rubber bullets when dealing with peaceful protesters.

A 37-year-old Northern California man was arrested on suspicion of killing his 90-year-old grandmother and trying to eat her body Monday afternoon.

Richmond officers responding to a 911 call of a man standing over a woman's bloody body allegedly found 37-year-old Dwayne Wallick in the act of eating his grandmother, Ruby Wallick, The Mercury News reports.

The University of Southern California will resume in-person classes for the fall semester, officials announced Tuesday, with face coverings a mandatory requirement.

The semester will begin on Aug. 17, a week earlier than originally scheduled, according to an announcement from university president Carol Folt. The university transitioned to online instruction in mid-March as concern over COVID-19 spread increased.