“We have not stopped. We have been continuously investigating this since this escape occurred,” Hutchens told reporters at a 9 a.m. news conference on Sunday.

An intense manhunt has been underway since sheriff’s officials discovered that 37-year-old Hossein Nayeri, 20-year-old Jonathan Tieu and 43-year-old Bac Duong had escaped the maximum-security facility on Friday. The trio apparently cut through steel bars and used a “makeshift rope” to rappel down the multistory facility, according to the Orange County Sheriff’s Department.

Detailing the current state of the investigation and search, Hutchens said that the department has received a number of “very good tips” from the public that have gotten them on the “right path.”

However, they have not actually been spotted yet, she added.

Hutchens also warned that authorities presume the inmates are armed. “Do not approach them,” she urged, encouraging the public to alert them to any possible sightings by dialing 911 instead.

It was still unclear what time the inmates escaped; they were last accounted for at 5 a.m. Friday and discovered missing around 9 p.m. that same day, according to sheriff’s Lt. Jeff Hallock.

Authorities immediately began searching for the inmates at the Central Jail complex, located at 550 N. Flower St., and the adjacent Civic Center, the Sheriff’s Department stated in a special bulletin released early the following morning.

The Sheriff’s Department, FBI, Orange County District Attorney’s Office, O.C. Probation Office and U.S. Marshals were all involved in the search and investigation, according to Hutchens.

By Sunday, the sheriff confirmed that the search spanned multiple counties; she believed the men were still in the U.S.

“There is no any indication at this time that anyone has left the country,” she said.

Authorities were contacting anyone they knew of with a relationship to the prisoners as part of the investigation. The inmates’ victims, and those who investigated the crimes they are suspected of committing, have also been contacted to ensure their safety. 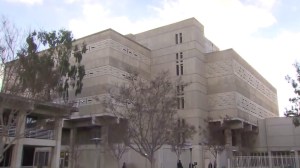 “We will not stop until the individuals are back in our custody, and I am confident that that will occur,” Hutchens said.

Evidence indicated that the prisoners cut through 1/2-inch steel bars, made their way through plumbing tunnels and gained access to an unsecured area of the jail’s roof, according to Hallock. From there, they pushed aside barbed wire, used a rope fashioned out of sheets, and rappelled to the ground.

They then fled the area, the lieutenant said, adding it was unclear whether they received any outside help.

How they were able to get out, where the tools they used came from, and whether they had any assistance were all the subject of a separate investigation, Hutchens said.

“This was clearly a well thought out and planned escape,” Hallock told reporters at a late-afternoon news conference on Saturday. The plan had possibly been in the works for weeks, or perhaps even months, he added. 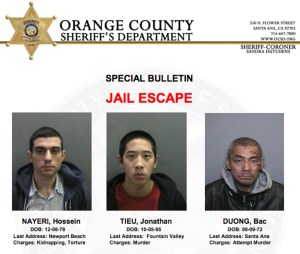 On Saturday afternoon, the Sheriff’s Department released surveillance video and several photos in connection with the case.

According to the agency, the images showed: a steel screen that the escapees cut through in order to access a plumbing tunnel; the unsecured area of the roof, where razor wire was “compromised”; and a section of the makeshift rope that the inmates used to rappel to the ground below.

The grainy surveillance footage, captured by a rooftop camera, includes shadows of the prisoners in the moments before they descended to freedom, authorities said.

The escape was the third in history at the maximum-security facility, which was built in the 1960s. According to Hutchens, 70 to 80 percent of the inmates housed at the jail are felons, and over 380 inmates are in custody for homicide, attempted murder or other serious violent crimes.

The escaped inmates had been held on various charges, most stemming from violent crimes: Tieu was held on suspicion of murder, Duong on an attempted murder charge, and Nayeri on charges of kidnapping and torture, according to the bulletin.

Two of the inmates — Nayeri and Duong — were ineligible for bail; Tieu’s had been set at $1 million, Hallock said.

A $30,000 reward for information leading to the captures of the three inmates was being offered by the U.S. Marshals; the FBI also announced it was offering up to a $20,000 reward in the case.

“We need the public’s help,” Hallock said. “People have seen, know people — whether it’s a friend, a family member. We need people to come forward.”

KTLA’s John A. Moreno contributed to this report.