A brush fire burning near Six Flags Magic Mountain and Hurricane Harbor left guests in a panic after they were told to evacuate the smoke-filled amusement park and then asked to shelter in place Sunday, authorities said.

The fire, dubbed the "Sky Fire," was reported at about 12 p.m. in the area of The Old Road and Sky View Lane in the Santa Clarita area, less than a mile east of the amusement park, Los Angeles County Fire Department officials said.

The fast-moving fire was at 3 acres when firefighters responded and it spread to burn about 50 acres with 20% containment by 3:20 p.m., according to L.A. County Fire spokesperson Melanie Flores.

Authorities announced the blaze was 50% contained shortly after 9 p.m. No structures were threatened by the fire, and firefighters had transitioned into "mop-up" operations Sunday evening as they took advantage of cooler temperatures and higher relative humidity levels, officials said. 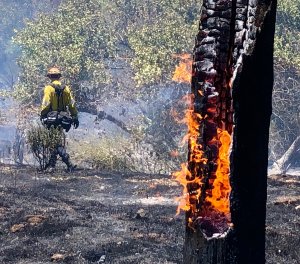 Firefighters battle a fire near Six Flags on June 9, 2019. (Credit: KTLA)Several videos posted to Snapchat stories showed panicked guests rushing towards the exit as smoke filled the park. Two people can be seen climbing over a fence in one video, and a group can be seen gathered by a gate with a caption reading "security won't let us out!" in another video.

At about 12:33, the park tweeted that guests were being evacuated. Half an hour later, the park said guests were told to stay at the park because all exit roads were closed. The park later said roads were reopened for people wishing to exit shortly before 2p.m. The circumstances surrounding the evacuation are unclear.

County fire authorities told the Los Angeles Times that park officials issued evacuation orders on their own. "We did not tell them to do this," Flores told the Times.

“They went ahead and had people leave the park because of the fact that there was so much smoke blowing in there and we were starting to see a situation where folks were developing smoke inhalation problems and had to leave the park. They felt it prudent to close the facility,” Los Angeles County Fire Captain Tony Imbrenda said.

At least nine people were transported to hospitals for smoke inhalation-related medical issues, according to Imbrenda.

Video posted on Twitter showed a group of people rushing towards an exit in the smoke-filled park. Some people were covering their mouths as they walked.

A teenager told KTLA  she was at the top of a water slide with her friends in Hurricane Harbor when they started coughing and seeing smoke billowing from a distance.

"We looked off the top and saw a fie spreading,," Lily Hunt said. "Once it got worse, [the employee] said we had to evacuate."

Hunt said she and her friends covered their mouths when ash starting falling from the sky as they left the water park.

A mother who was celebrating her daughter's 12th birthday at the park said she was at a concession stand when she noticed the smoke.

“When the kids started to panic, we decided that it was time to leave,” Tina Wiener said.

Wiener said the group couldn't get to the parking lot and opted to go to a nearby coffee shop to wait for things to settle down.

"The last place you want to be in an emergency, is inside a theme park with lots of people who are nervous,” Wiener said.

Six Flags Magic Mountain closed at 4 p.m., according to authorities.

"The safety and well being of our guests and team members is our top priority," the amusement park said in a tweet.

The Magic Mountain Parkway off-ramp from the southbound 5 Freeway was closed for about 90 minutes, according to California Highway Patrol.

The temperature in the area was recorded at about 93 to 96 degrees Fahrenheit, with 10 to 15 mph northeast winds blowing gusts up to 25 mph, according to the National Weather Service.

The brush fire is one of several reported in Southern California Sunday morning as forecasters warned of elevated fire conditions due to the hot, dry and windy weather.

The cause of the fire is under investigation.

@LACOFD Excavator from Dozier Team 6 continues to shore up and reinforce containment lines on the #SkyFire Containment still stands at 20%. Firefighters will continue mop up operations throughout the night. Magic Mountain closing at 4pm, 9 people transported due to smoke exposure pic.twitter.com/tfPj0ofFPG

The Cybersecurity and Infrastructure Security Agency updated over the weekend its list of essential sectors during the COVID-19 outbreak, adding, among others, real estate services.

The outbreak has not immediately led to a major decline in housing prices, but the industry has seen a spike in dropped deals, heightening concerns among real estate professionals.

The year since Nipsey Hussle was gunned down has not diminished the rapper's legacy, but rather cemented it and continues to prove true his catchphrase, “The Marathon Continues.”

Tuesday marks the first anniversary of Hussle's death and his popularity and influence pushes forward as strong as ever. He won two posthumous Grammys in January, he remains a favorite of his hip-hop peers and his death has reshaped his hometown of Los Angeles in some unexpected ways.

As the number of grocery store workers testing positive for COVID-19, Los Angeles area markets are incorporating more and more safety measures to try to keep the virus from spreading. Christina Pascucci reports for the KTLA 5 Morning News on March 30, 2020.

California prepares for coronavirus surge in week ahead

L.A. Convention Center to be converted into field hospital as city sets up shelters for homeless