Skip to content
This is an archived article and the information in the article may be outdated. Please look at the time stamp on the story to see when it was last updated.
A mudslide forced the closure of Pacific Coast Highway in Malibu Saturday as a flash flood warning remained in effect for areas in both Los Angeles and Ventura counties where hillsides have been left denuded by the recent Woolsey and Hill fires, authorities said. Saturday’s storm brought rainfall rates of more than half-an-inch per hour in some portions of Southern California, federal forecasters said in an advisory issued Saturday afternoon through midnight. Authorities initially issued a flash flood watch, but upgraded the advisory to a warning, which indicates a greater level of risk. As the storm system continues through the area, “There will be a slight chance of thunderstorms, with the potential for short duration periods of very heavy rainfall, such as 0.5 inches in 30 minutes, or even heavier bursts of rain in 15-minute durations,” according to the advisory. “Rainfall of this intensity can produce dangerous mud and debris flows in and near the recent burn area, including the Hill and Woolsey burn scars,” the statement continued. “In addition, localized flash flooding will be possible across portions of Ventura and Los Angeles counties experiencing heavy rainfall, along with rockslides and mudslides that could produce road closures.” Funnel clouds were sighted off the coasts of both Long Beach and Oxnard on Saturday afternoon. 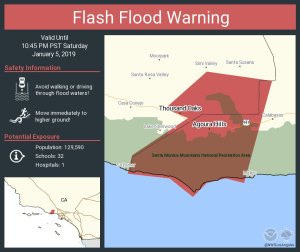 A mud flow on Pacific Coast Highway near Mullholland Highway in Malibu trapped two cars in mud, according to the CHP. Both directions of travel were shut between Las Posas Road and Encinal Canyon Road as crews cleaned up the mess. The closure was expected to last through at least Sunday, according to Caltrans. Another mudslide covered all lanes of traffic along PCH near Tonga Street in Ventura County, prompting a road closure, CHP logs showed. Authorities reported debris slides affecting traffic lanes in the area of Casitas Pass Road and Chismahoo Road near Carpenteria, as well as in the area of Paradise Road and San Marcos Pass Road near the Cachuma Lake Recreation Area in Santa Barbara County. CHP reported rocks and mud in lanes near and rocks slides over the roadway by Paradise and Highway 154 near the Cachuma Lake Recreation Area in Santa Barbara County. Those living in the recently burned areas are urged to take steps to protect their property, remain alert an follow any directions given by emergency responders. Meanwhile, the storm brought snow to higher elevations. Chains were required for vehicles traveling at elevations above 4,000 feet along state routes 18 and 38 heading into Big Bear, Caltrans officials said.

PCH is now closed from Las Posas Rd in Ventura County to Encinal Canyon Rd in Malibu until at least Jan. 6 due to mudslides & flooding. Caltrans maintenance crews are on-scene assisting with clean up. Here are some photos from the PCH and Decker Cyn Rd, and PCH @ Yerba Buena Rd. pic.twitter.com/oIS4gbzRhC

Earlier we had a funnel cloud of the coast of #Oxnard. Here is a video of the waterspout from our office @NWSLosAngeles #CAwx #SoCal @GarofaloWX @Ginger_Zee @JimCantore pic.twitter.com/J24xDjyORe

Marty Roberts, one half of the irrepressible, crowd-pleasing lounge duo Marty & Elayne — the beloved L.A. partnership that serenaded everyone from Frank Sinatra to Nicolas Cage and stole the 1996 film “Swingers” out from under Vince Vaughn and Jon Favreau — died from cancer on Thursday. He was 89.

In a wealthy enclave along the Santa Monica Mountains that is a haven for celebrities, residents are now facing more aggressive consequences for wasting water.

The Las Virgenes Municipal Water District northwest of Los Angeles hopes to spur water savings by making it easier to fine households that go over their allotted “water budgets" and threatening to vastly limit water flow to customers who repeatedly fail to conserve.

‘My heart is so broken’: Mother, community mourn 3 teens killed in Pasadena crash

Here are the California counties with the highest COVID vaccination rates