The tail end of a storm that moved across Southern California over the weekend dropped a blanket of what appeared to be snow on the sand and pier in Huntington Beach Monday morning.

The “winter wonderland” was in fact created by about a 1/2 inch of hail, the National Weather Service’s L.A. forecast office stated on Facebook. A tweet from the weather service in San Diego, which covers Orange County, said it was about 1 inch.

Other areas, including Long Beach and the Palos Verdes Peninsula, likewise reported hail. Photos on social media showed an unfamiliar layer of white across residential yards and streets — appearing at first glance like a dusting of snow.

“It’s rare — I really haven’t seen it before,” said teen Brenden Sallstrom in Huntington Beach. “You’ve got the snow and you’ve got the beach here, combined in one. … I’d like to think it’s snow.”

Surfers took advantage of the storm to ride the hail-covered grass slope down onto the sand — on skimboards.

By afternoon, the hail had melted away at the beach.

The area was subject to a “special marine warning” from the weather service, which said a cluster of strong thunderstorms was centered on Huntington and Newport beaches about 10 a.m., with waterspouts possible.

Beachgoers in Orange and San Diego counties may also see lightning, and thunderstorms were possible through the rest of the day at beaches, the National Weather Service said. In a separate tweet, people at Los Angeles County beaches were told to take shelter because of lightning Monday morning.

Monday’s rare sight occurred the last day of a winter weather advisory in areas near Orange County, including Los Angeles and Ventura counties. The advisory in those areas warned of snow and hail, and was set to expire at 7 a.m. Tuesday. Mountain ranges were expected to get additional snow following a storm that dumped on the region Saturday and Sunday.

People were also advised to avoid going in the ocean until Wednesday because bacteria levels likely rose after recent rainfall may have caused contaminants to runoff into the water, the L.A. County Department of Public Health stated on its website. 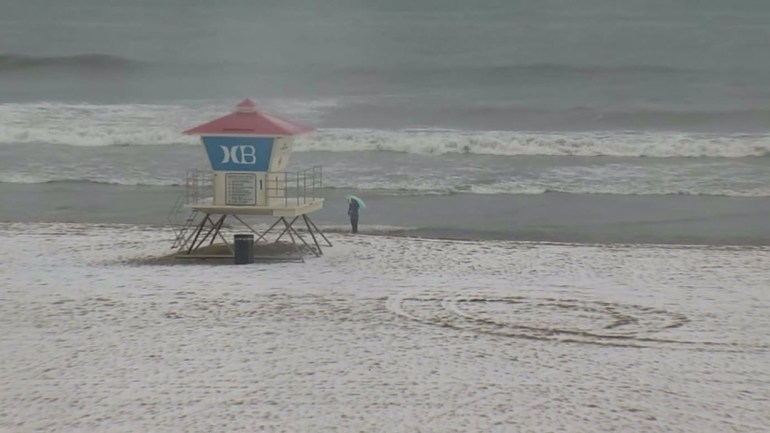