The search continued Thursday for a male driver who struck a grandmother and her two grandchildren, killing the grandmother, before fleeing the scene on Wednesday afternoon, authorities said.

The deadly collision took place about 1:15 p.m. in the 14800 block of Escalona Drive, near La Mirada Boulevard and Rosecrans Avenue, Deputy Erin Liu of the the Los Angeles County Sheriff’s Department Information Bureau said in a written statement.

The woman and her grandchildren, a boy and a girl, were walking north along the street when they were struck from behind, according to sheriff’s officials.

“Preliminary investigation at the scene revealed that an unknown male driver failed to stop after the collision and continued north on Escalona Road and out of view,” Liu said.

Paramedics took the grandmother to a hospital where she soon succumbed to her injuries, authorities said. Her identity was not released by coroner’s officials Thursday.

The two children were treated for injuries described as minor.

The driver of the hit-and-run car has been described only as male, sheriff’s officials said.

Deputies described the involved car as a 2015-2017, dark gray, four-door Toyota Camry with damage to its passenger-side headlight area as a result of the impact.

Investigators have released a surveillance photo of the car obtained just before the hit-and-run in hoped of generating tips from the public. 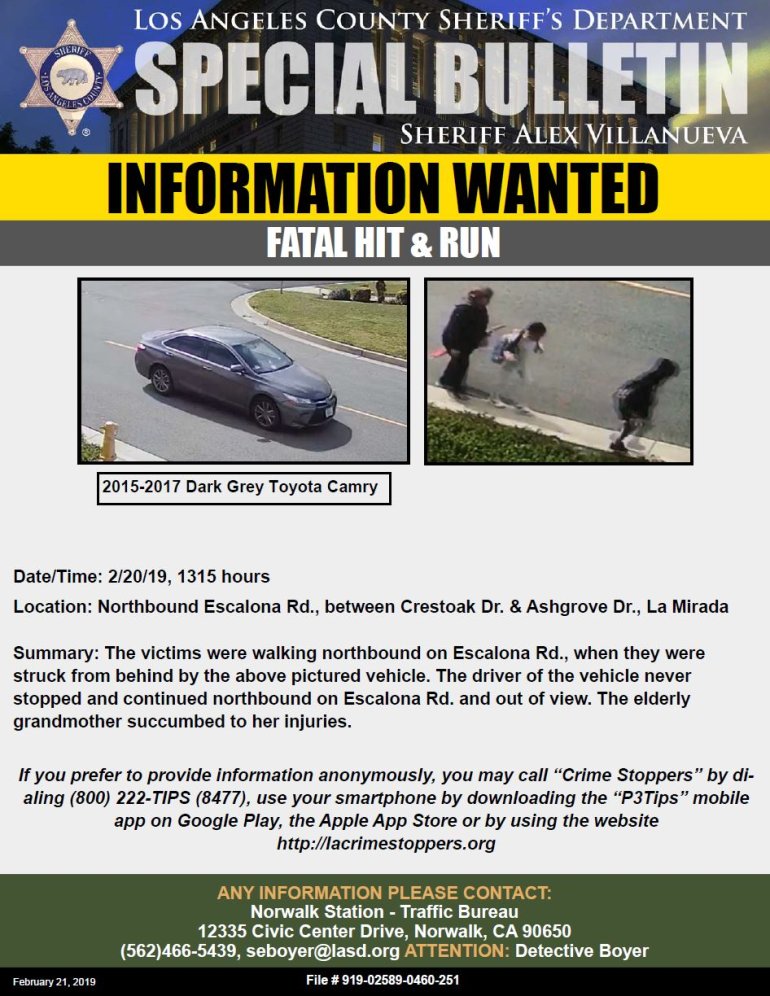 If Selena Day wasn’t marked on your calendar already, now is the time to do so. The celebration honors the late singer Selena Quintanilla’s birthday; she would have turned 50 today.

Selena, as she was simply known, rose to fame in the early 1990s as a driving force in Tejano music, a male-dominated genre that she helped launch into the mainstream. At age 23, she was murdered March 31, 1995, by Yolanda Saldivar, the president of her fan club.

Kyle Davis, 35, is also charged with vandalism and assault in the two attacks, which occurred last September and this month, the Ventura County District Attorney’s Office said in a news release.

Two Kroger grocery stores in Long Beach are set to close this weekend over the chain’s opposition to the city’s ordinance mandating an extra $4 per hour in hazard pay for grocery workers.

The chain announced in February it would shutter the Ralphs at 3380 N. Los Coyotes Diagonal and the Food 4 Less at 2185 E. South St. on Saturday, April 17.