University police said Friday they are searching for a man wanted for sexual battery after multiple women accused him of grabbing them on or near the UCLA campus several times since March. 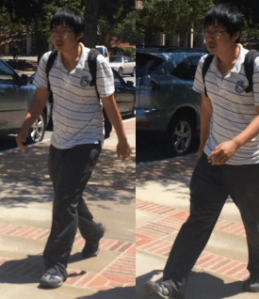 The man allegedly grabbed three different women’s upper thighs as they passed him on Thursday between 9 and 10 a.m., the University of California, Los Angeles Police Department stated in a news release.

Several of the victims reported having prior incidents with the man in the past several weeks, and one woman reported an issue with him in early March.

Police provided an image of the man they were searching for, and described him as being Asian, between 18 and 22 years old, standing about 5 foot 10 inches tall, with a medium build and short, unkempt hair. He was wearing a white polo shirt with thin

He was wearing a white polo shirt with thin horizontal black stripes and dark gray pants, black tennis shoes with white soles,  glasses and a backpack in the image, which was taken Thursady near Westwood Boulevard and Le Conte Avenue (map).

No one was injured in the attacks, according to police.

The victims were all UCLA students, and the man’s affiliation with the campus was unknown.

A Los Angeles Fire Department captain severely burned in a May 2020 explosion inside a downtown L.A. warehouse has sued the owners of the building and a vaping supply shop housed there, accusing them of hazardous activity, premise liability and negligence.

Victor Aguirre and his wife, Claudia Aguirre, filed suit Wednesday in Los Angeles County Superior Court against property owner Steve Sungho Lee and his various companies along with the operators of Green Buddha and Smoke Tokes, a smoke and vape shop inside the East 3rd Street warehouse where the explosion occurred. Twelve firefighters were injured.

A former Minneapolis police officer convicted of murder in the death of George Floyd is scheduled to be arraigned Thursday for allegedly violating the civil rights of a teenager in a separate case that involved a restraint similar to the one used on Floyd.

Derek Chauvin was convicted earlier this year on state charges of second-degree unintentional murder, third-degree murder and second-degree manslaughter in Floyd's 2020 death. He was sentenced to 22 1/2 years. He's also charged in federal court with violating Floyd's civil rights when he knelt on the Black man's neck for about 9 1/2 minutes as Floyd was face-down on the pavement, not resisting and pleading for air.

A suspected hit-and-run driver was arrested Wednesday after a crash in Playa del Rey over the weekend killed a mother who’d been visiting the beach with her family, officials said.

SpaceX launches 4 civilians into orbit on its 1st private flight

California projected to take in 5,200 Afghan evacuees, more than any other U.S. state

2 Anaheim residents among 4 accused in theft of nearly $2M in goods from 43 CA stores, including TJ Maxx

Child tax credits go out soon: How to check September payment, what to do if one hasn’t been received

Stimulus checks, child tax credits going out to millions of Californians this week