A 51-year-old man was arrested in connection with a fire that broke out early last month at a Glendale church, the Glendale Police Department said Wednesday. 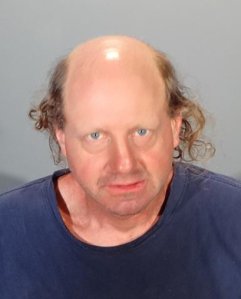 San Pedro resident Donald Walter Maitz, a former congregant of Faith Center Church was taken into custody Sunday following an investigation into a July 6 fire at the parish, located on the 1600 block of South Glendale Avenue about a block up from Forest Lawn Memorial Park, officials said.

The fire was fortunately stopped before it caused much damage, but evidence suggests whoever started it was planning to create a bigger blaze, according to police.

Surveillance video captured at the scene shows a man throwing a Molotov cocktail onto church property, which is then set ablaze.

A Glendale Officer Sharon Kim, who was patrolling the area, caught sight of the flames and was able to put them out.

“The fire was kind of at the gas line, and there’s a lot of foliage in the area, so I wanted to put the fire out before it caused a big explosion," she told KTLA. "I didn’t know if people were still inside the church.”

At the time, however, Kim was unaware it was intentionally set by someone who allegedly fled the scene once her patrol car arrived.

DNA evidence collected from the remaining devices led police to identify Maitz as the suspect.

Although detectives began investigating the incident as a hate crime as well as arson, once Maitz was connected to the crime officials discovered he was previously a member of the congregation and volunteer at the church before being banned because of unspecified inappropriate behavior. Investigators now believe a personal vendetta motivated the attack, rather than a generalized hatred of the church or its religion.

Led by pastor Melissa Scott, Faith Center is well-known for its televised sermons and has members worldwide.

Maitz has been charged with one count of arson and one count of use of a destruction device, according to police.

The Fairview Developmental Center in Costa Mesa will be used as an alternative care site to help fight the surge in COVID-19 patients anticipated in California over the next few weeks, it was announced Wednesday.

The center will relieve stress on local hospitals during the coronavirus pandemic by providing beds to non-infected patients in a role similar to that of the USNS Mercy in the Port of Los Angeles.

Dr. Frank Candela, chief of staff at West Hills Hospital in the San Fernando Valley, started a GoFundMe last week to raise money for more safety gear at his medical center, where masks and face shields are running short as coronavirus cases mount.

As Los Angeles prepares for a storm of coronavirus cases, efforts to get homeless people off the streets and to secure rooms for patients to stay without risk of infecting others are off to an uneven start.

So far, Los Angeles County’s hastily compiled network of quarantine and isolation sites have largely remained empty, while its plan to add thousands of beds in hotels and motels is just getting underway.