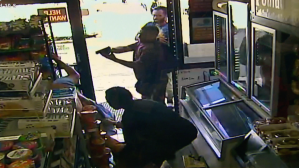 A pair is facing felony charges after being caught on surveillance video attacking a clerk and shooting him with an air gun at a convenience store in Hollywood, allegedly to steal a case of beer, prosecutors said Tuesday.

Christian Vela, 22, and Jeanette Zavala, 21, have been identified as two of the three individuals police were searching for following the violent incident last Wednesday, Sept. 26, at the Arco gas station on the corner of Melrose and Western avenues.

Zavala tried to walk out of the store with a case of beer around 5 p.m. and was followed by the employee, who confronted her and took back the product, the Los Angeles County District Attorney’s Office said in a news release.

Video of the ensuing struggle shows the woman identified as Zavala throw open the shop’s door and speak angrily to the clerk, who attempts to force her out of the business.

Vela rushes in, brandishing what investigators say is a BB gun. Prosecutors allege he used it to shoot the worker several times as the verbal disagreement devolved into a brawl.

The clerk is seen restraining Zavala with his arms, but she eventually ends up being thrown to the ground, ripping off the clerk’s shirt in the process. Vela, meanwhile, continues to discharge his weapon.

After the clerk eventually winds up on the floor, Zavala can be seen pulling another case of beer from a refrigerated case before leaving.

The store employee was hospitalized due to the lacerations and abrasions he sustained in the skirmish.

Both Vela and Zavala fled the gas station scene, but were found later that evening after getting into an argument with workers at a McDonald’s in the 5400 block of West Sunset Boulevard, the DA’s office said.

Police were called to the eatery after the pair damaged kitchen equipment and shot a window with the pellet gun, according to prosecutors.

Both defendants were detained at the scene, officials said.

Officers had initially said they were searching for a second woman in the gas station robbery. It’s unclear whether a third suspect is still being sought.

Vela is additionally accused of using a deadly and dangerous weapon during the robbery.

If convicted as charged, he could face a maximum possible sentence of 11 years and four months in state prison, while Zavala be sentenced to up to five years and eight months in prison, prosecutors said.

Inmate records show Vela was arrested around 7:30 p.m. last Wednesday and released two days later after being held on $101,000 bail, while Zavala was formally arrested on Sunday and remains incarcerated.

L.A. police detectives are continuing to investigate the case.

Some at UCLA protested what they called the university’s “collaboration” with LAPD in allowing the use of the university’s Jackie Robinson Stadium to process protesters arrested for curfew violations during the uprising sparked by the police killing of George Floyd.

In a letter, dozens of faculty members said police deliberately crowded protesters arrested in downtown Los Angeles and Westwood into sheriff’s buses and brought them to the stadium, where the university’s baseball team plays under a lease with the U.S Department of Veterans Affairs.

The curfew in place across Los Angeles County amid peaceful demonstrations Tuesday will continue until "protests are gone," Sheriff Alex Villanueva told KTLA.

But the American Civil Liberties Union says the curfew is not constitutional to begin with.