Authorities were seeking a man who robbed a Norm’s restaurant in Downey at gunpoint, officials said Wednesday. 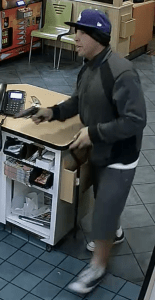 The man, who walked with a cane, held a small semiautomatic handgun as he approached the cash register,  surveillance video showed. The incident occurred the evening of Dec. 12 at the Norm’s restaurant on 7955 Firestone Blvd, city officials said in a statement.

The robber took money from the register and exited the restaurant through the front door to an awaiting vehicle, officials said.

Officers responded to the scene at around 9:30 p.m., according to authorities.

Officials describe the robber as a 40- to 50-year-old Hispanic man about 5 foot 8 inches tall weighing around 180 pounds. The video showed him wearing a blue L.A. Dodgers cap on top of a black beanie, a gray sweatshirt and gray shorts.

Los Angeles Mayor Eric Garcetti is set to update the public on his administration’s response to the coronavirus pandemic at 5:15 p.m. Thursday.

Other recent briefings from the mayor have focused on the city’s struggle with vaccine supply shortages that resulted in city-run vaccine centers having to shut down and postpone appointments.