Authorities are attempting to identify at least seven men who were involved in multiple strong-arm robberies in the parking lot of an El Segundo hotel, police said Thursday. 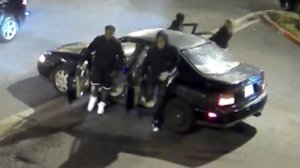 The thefts were caught on surveillance cameras April 28 at a Residence Inn in the 2100 block of East El Segundo Boulevard, according to the El Segundo Police Department.

Four men drove to the hotel around 11:10 p.m. and proceeded to attack two victims in the parking lot. A second car with at least three people in it was involved as well, investigators said.

“As you could see by the video, they had no problem putting their hands on people," Police Lt. Raymond Garcia told KTLA. "It’s shocking to watch, especially if you’re a parent. You don’t want to see your child handled that way.”

The group first targeted a man with a backpack, ganging up on him and stealing his bag, police said. Even after they took his belongings, they proceeded to kick and punch him as he lay on the ground, the surveillance video shows.

Several of the men can then be seen violently beating up a man who was near his car with a woman.

The group then turns their attention to a group of women in another part of the parking lot. One of the men punched one of the woman in the back of her head before grabbing her necklace off her neck, Garcia said.

The blitz of violence was executed in only a matter of minutes, according to police.

Officials only described the suspects as black men who are believed to be between 18 and 22 years old. They were not armed during the attack.

Garcia believes the men knew of several parties going on at the hotel that Saturday night.

“Based on what they were wearing — one was wearing gloves — it appears they may have knew that there was a gathering there and took the opportunity to (say), ‘Hey, we go there, pick up some quick things,” he said.

The initial four men were in a late model, black Honda Accord, while the second group drove a two-door coupe that was possibly an older Lexus, according to investigators.

The Honda was missing its left rear hubcap and had sustained damage on its front left fender in a car crash. The second vehicle also had some damage in its rear bumper area, police said.

Anyone with information on the perpetrators' identities can contact Detective Paul Saldana at 310-524-2284 or psaldana@elsegundo.org.

Los Angeles Police Chief Michel Moore predicted Tuesday that the city will see more than 300 homicides this year — a grisly milestone not reached in L.A. in more than a decade.

A fighter pilot ejected safely from a jet before it crashed Tuesday morning near a rock formation in eastern Kern County, authorities said.

The F/A-18E Super Hornet from the Lemoore Naval Air Station crashed during a routine training flight in the Superior Valley, just south of China Lake Naval Air Weapons Station, according to a statement by the Lemoore station.

A 38-year-old man pleaded guilty in the fatal stabbings of his three children, whose bodies were found in a parked SUV in in the Historic South-Central neighborhood of South L.A. five years ago, prosecutors said Tuesday.

Luiz Fuentes entered the guilty plea to three counts of first-degree murder, according to the Los Angeles County District Attorney's Office. The judge immediately sentenced him to 78 years to life in prison.