Police seized 4,600 marijuana plants from nine commercial units and arrested one person during a raid at a San Bernardino business complex on Tuesday, officials said.

The bust took place about 11 a.m. at a row of commercial units in the 300 block of West Athol Street, San Bernardino Police Department Captain Richard Lawhead said in a written statement.

“Out of the 15 units, nine were found to be operating an illegal grow,” he said.

Police arrested one suspect at the scene on suspicion of illegal cultivation of marijuana, Community Engagement Officer Eilieen Hards said. The suspect’s identity was withheld Wednesday as the investigation continued.

“The nine units were also red-tagged by the building inspector for safety issues,” Lawhead added. “Code enforcement will be following up with the property owner to resolve the building issues.” 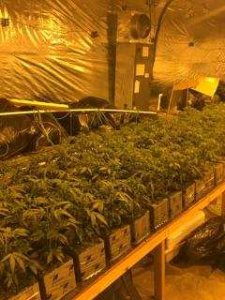 While the pot garden raided Tuesday was allegedly operating illegally, the city put ordinances in place that allow for lawful marijuana-related businesses in March.

Authorities were in pursuit of a driver in the San Fernando Valley area Friday night, a chase that ended with several vehicles hit and a shirtless man running across the 210 Freeway.

The driver was originally wanted for speeding when the pursuit began at 7:16 p.m. on the northbound 405 Freeway in Torrance, according to California Highway Patrol.

Some evacuation orders in the Antelope Valley have been lifted as containment of the nearly 114,000-acre Bobcat Fire has increased to 55%, officials said Friday.

The orders changed to warnings as of 4 p.m., and only residents of the following areas were allowed to return home: