Two California Highway Patrol Officers came up with a technique on the spot to stop a speeding Tesla Model S with an allegedly drunken driver asleep behind the wheel on the 101 Freeway in Redwood City on Friday, authorities said. 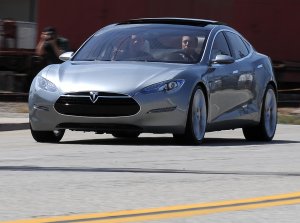 The encounter took place just before 4:30 a.m. on the southbound freeway near Whipple Avenue, the CHP said in a written statement.

The officers saw the car traveling at about 70 mph and realized the driver appeared to be unconscious, officials said. The driver showed no response when the officers activated their emergency lights and sirens while directly behind the Tesla in an attempt to pull it over.

They were able to slow the auto-piloted car to a complete stop.

After finally managing to rouse the driver, officers determined he was under the influence of alcohol, CHP officials said. Alexander Samek, 45, of Los Altos was arrested on suspicion of DUI.