Authorities on Monday confirmed that the Saddleridge Fire started beneath a high-voltage transmission tower in the Sylmar area before spreading to consume thousands of acres.

Though it’s unclear what sparked the blaze, investigators narrowed down its origin to a small patch under the Southern California Edison-owned power lines, according to the Los Angeles Fire Department.

Fanned by strong Santa Ana winds, the blaze scorched 8,391 acres, or just over 13 square miles of land, damaged or destroyed 75 structures, blanketed neighborhoods with thick smoke and forced the evacuation of thousands of people.

One Porter Ranch man died of a heart attack while trying to douse approaching flames with a garden hose, and three firefighters were injured in the fire, including one who suffered a minor eye injury, authorities said.

LAFD Chief Ralph M. Terrazas said Friday that investigators were following up on reports that a man witnessed the fire start at the base of a power line in Sylmar.

SoCal Edison said they notified state regulators that their system was impacted when the blaze started at about 9 p.m. Thursday near Yarnell Street and Saddle Ridge Road in Sylmar.

“The company’s top priority is the safety of customers, employees and communities, which is why we continue to enhance our wildfire mitigation efforts through grid hardening, situational awareness and enhanced operational practices,” SoCal Edison spokesman Paul Griffo told KTLA in a written statement.

The utility told the Los Angeles Times that it did not de-energize any power lines in area of the fire and said that it was too early to determine what caused the blaze.

“Investigators continue to work around the clock in steep terrain, thoroughly examining all aspects of the scene in an attempt to determine a cause,” LAFD said.

As the cause of the fire remains under investigation,  LAFD crews and investigators from SoCal Edison and private insurance companies will be working at the site. 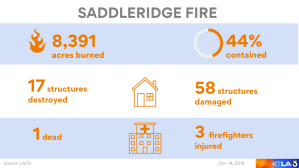 The Borderline Bar & Grill in Thousand Oaks, the scene of a tragic mass shooting that left 13 people dead in November 2018, will likely permanently close due to pandemic-related struggles.

Edgar Gustavo Villamarin was also ordered to register as a lifetime sex offender. According to prosecutors, he touched or fondled the victims in incidents between 2014 and 2018.

Amazon won't be forced to immediately restore web service to Parler after a federal judge ruled Thursday against a plea to reinstate the fast-growing social media app, which is favored by followers of former President Donald Trump.

U.S. District Judge Barbara Rothstein in Seattle said she wasn't dismissing Parler's “substantive underlying claims” against Amazon, but said it had fallen short in demonstrating the need for an injunction forcing it back online.

Amid talk of cancellation, Tokyo Olympics organizers push back