Prosecutors filed murder and  assault charges Friday against a Marine from San Clemente accused of killing his girlfriend’s 17-month-old daughter at an apartment in Orange earlier this month, authorities said. 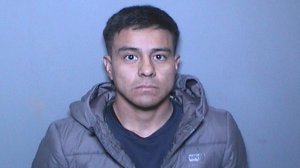 Christopher David Recio, 28, entered no plea when he appeared in Orange County Superior Court to face charges of murder and assault on a child likely to produce great bodily injury or death, the Orange County District Attorney’s Office said in a written statement.

“The defendant is accused of murdering 17-month-old Jane Doe in the city of Orange by causing blunt force trauma to the victim’s head,” according to the statement.

The injuries occurred on Jan. 5 at a home in the 3100 block of West Chapman Avenue, Orange Police Department Sgt. Phil McMullin said. Recio, who is described in booking records as a U.S. Marine, was not the child’s father.

Firefighters were first summoned to the apartment about 5:30 p.m. after someone reported the toddler needed medical help, the sergeant said.

Paramedics took the girl to a hospital, where she succumbed to her injuries the same day, McMullin said.

Details regarding how exactly the girl was injured were not available Friday. But McMullin said through their investigation, detectives determined the incident was not an accident.

“This was an intentional act,” the sergeant said.

Prosecutors declined to discuss the details of the case.

Recio was scheduled to return to court for an arraignment hearing on Feb. 8.

A U.S. Marine sergeant by the same name was honored by the L.A. Galaxy Soccer Team in May as the team’s “Hero of the Game.”

A profile for the honoree stated that he had served eight years with the Marines, including two combat deployments to Afghanistan and two deployments to Japan. He was stationed at Camp Pendleton, serving as a combat instructor in an infantry training battalion.

The Judicial Council of California approved 11 temporary emergency measures Monday, including one to set bail to zero in response to the coronavirus pandemic.

The measure directs judges to remove bail fines for misdemeanor cases and low-level felonies, as the state moves to reduce jail populations amid spread of COVID-19, the Judicial Council said after a telephone meeting.

Another three firefighters in San Bernardino County have tested positive for the novel coronavirus, raising the confirmed cases among firefighters there to five, officials announced Monday.

The new cases were confirmed Saturday in firefighters assigned to the San Bernardino County Fire Protection District and Daggett Fire Department, according to a news release from the county's All Hazard Regional Incident Management Team.

Los Angeles Mayor Eric Garcetti announced Monday that the county is expanding testing for the novel coronavirus by removing restrictions on who can get tested.

Any resident in the county can now apply for a test online, the mayor announced, later clarifying that people will need to have COVID-19 symptoms to actually get tested at one of the county's free drive-up testing sites.

L.A. officials crack down on speeding amid stay-at-home orders

Boeing temporarily halts all U.S. production of commercial airplanes due to coronavirus pandemic

‘This will be the week to skip shopping’: Officials warn of critical time as L.A. County COVID-19 cases top 6,300 with 147 deaths

Periods of rain during the afternoon Precip: 70%
× Close Ad