Authorities pursued a stolen SUV through the San Gabriel Valley and into the Angeles National Forest on Wednesday afternoon before the driver surrendered.

Deputies broke off the active pursuit but continued following the vehicle as it made its way into the West Covina area, where police officers resumed the chase as it headed into Azusa, then continued north on San Gabriel Canyon Road into the Angeles National Forest. 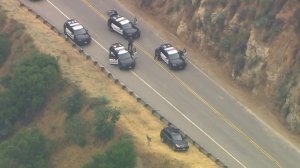 The SUV pulled off the roadway and stopped just under an hour after the chase began. The driver could be seen in aerial footage holding his hands out of the window while officers help him at gunpoint and a police K-9 stood at the ready.

The suspect ultimately complied with commands to surrender.

Wearing their masks, Donalene Ferrer and two other generations of family members were walking along an Oceanside neighborhood in April when a car pulled up and a woman yelled: “You started the corona!”

The accuser, with a baby and a toddler in tow, turned out to be her mother’s neighbor, Ferrer said. Still in shock, the victim said she stepped near the woman to ask, “Why are you targeting us? I’m a nurse and my father fought for this country. You shouldn’t be teaching your children racism.”

Several trees caught fire, including some in a San Dimas neighborhood, on 4th of July as fireworks lit up the sky across Southern California.

Jennifer McGraw reports for the KTLA 5 Morning News on July 5, 2020.

At least one person was taken into custody Saturday night following the pursuit of an ambulance stolen from the site of a fire in South Los Angeles.

Los Angeles Police Department officers began chasing the ambulance around 9 p.m. Saturday in the area of 24th Street and Nevin Avenue in the Central-Alameda neighborhood of South Los Angeles, according to LAPD.