Detectives sought the public’s help Thursday in identifying whoever is responsible for the fatal shooting of a 37-year-old man in Compton last month.

The victim, identified by authorities as Jeffrey Jackson, was shot and killed in the 13000 block of Cookacre Street on April 7, the Los Angeles County County Sheriff’s Department stated in a news release.

The gunman was believed to be driving a blue, four-door, mid-2000s model sedan described as similar to a Honda Civic.

The vehicle was missing a rear, passenger-side hubcap and had a Dodgers flag protruding from the passenger side window.

Authorities released an image of the car in a bulletin requesting help from the public.

Investigators have not announced a possible motive for the shooting.

Correction: An earlier version of this story incorrectly identified a suspect in the killing of Jeffrey Jackson. The man’s name has been removed from the article. 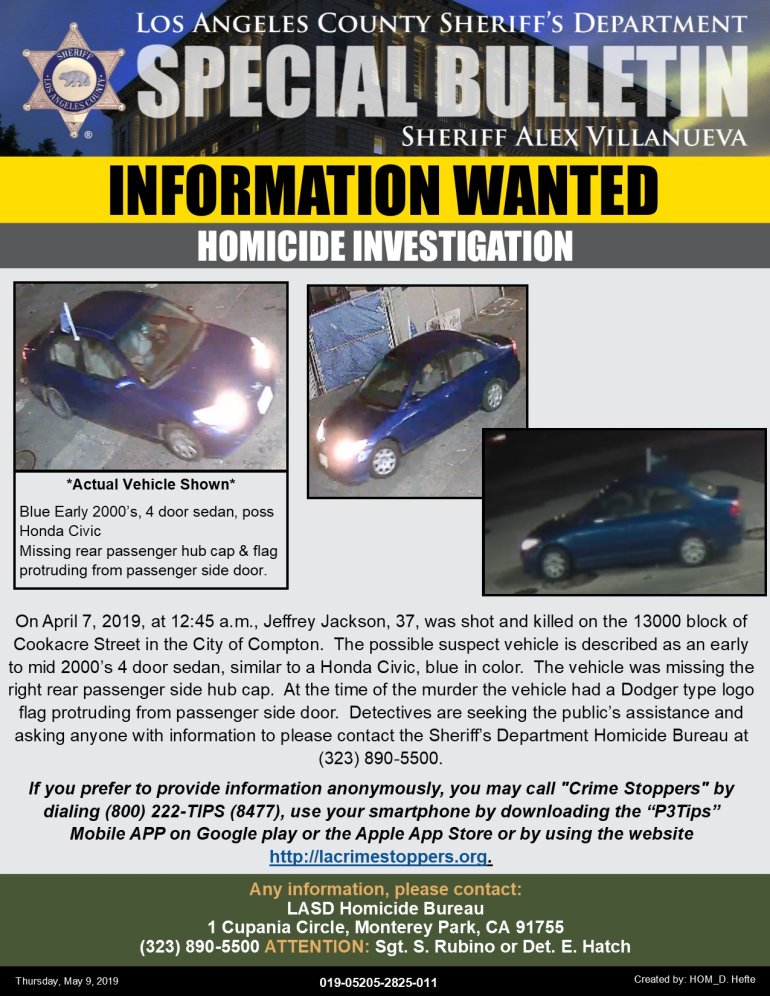 An investigation is underway after police responding to a domestic violence call found a husband dead and a wife injured in Santa Ana on Thursday, authorities said.

Officers were initially called out to the home in the 1000 block of West Bishop Street around 9:30 a.m. following a report of a domestic violence incident, according to the Santa Ana Police Department.

An Oxnard plastic surgeon accused of sexually assaulting one of his patients is facing several more criminal charges after another 14 women came forward, prosecutors said Thursday.

David Michelson, a 73-year-old Newbury Park resident, faces a total of 37 charges stemming from allegations involving patients who were mostly Spanish-speaking and residents of Ventura and Santa Barbara counties, according to the Ventura County District Attorney's Office.

Biden on Wednesday ordered a “pause” on all wall construction within a week, one of 17 executive orders issued on his first day in office, including six dealing with immigration.

As SoCal slides into drought, much-needed rain is in the forecast

O.C. man gets 24 years for traveling from Michigan to sexually abuse minors, including 6-year-old girl: DOJ

‘Come with me if you want to live’: Schwarzenegger gets COVID vaccine, urges others to follow suit