A powerful and shallow earthquake hit several southern Philippine provinces Wednesday night, leaving at least one person dead, injuring more than two dozen in collapsed houses and prompting thousands to scramble out of homes, shopping malls and a hospital in panic, officials and news reports said.

The U.S. Geological Survey said the magnitude 6.4 quake was centered about 8 kilometers (5 miles) from Columbio, a landlocked town in the coastal province of Sultan Kudarat. The earthquake had a depth of only 14 kilometers (9 miles). Shallow quakes tend to cause more damage than deeper ones.

Several relatively strong aftershocks were felt and officials ordered classes to be suspended Thursday to allow inspections of school buildings in the quake-hit areas, including in President Rodrigo Duterte’s hometown of Davao city. Duterte was in the capital, Manila, when the quake struck. Some areas lost their power due to the quake, hampering immediate and detailed inspections of possible damages, officials said.

A fire broke out in a shopping mall in southern General Santos city shortly after the quake hit, but it was unclear whether it was sparked by the temblor, officials said.

A girl was hit by collapsed wall in a house and died in Datu Paglas town in Maguindanao province, ABS-CBN television network reported, citing a police report, adding that in nearby Tulunan town in North Cotabato province, two residents were injured by falling fragments from a concrete wall.

Vice Mayor Joselito Pinol of North Cotabato’s M’lang town said patients were evacuated out of a hospital to ensure their safety during and after the quake, which injured three people by falling cinder blocks elsewhere. Several buildings were damaged and some electric posts got toppled, Pinol said, adding that the shaking was so powerful the facade of his office crashed down with glass windows.

In the farming town of Magsaysay in Davao del Sur province, more than 20 villagers were injured by falling objects in their homes as the ground shook. “Many houses were damaged, some totally. There were many aftershocks,” town information officer Anthony Allada said. 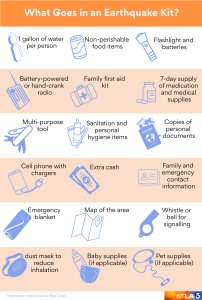 Leslie Francisco, a local disaster-response officer, said a small school building in the downtown area of Digos city in Davao del Sur province sustained damage but there was no report of anybody being trapped inside.

Several residents in the coastal town of Malita, the capital of Davao Occidental province, scrambled out of their houses to an elevated portion of the town, fearing a tsunami although no giant waves came, an official said.

One of the world’s most disaster-prone countries, the Philippines has frequent earthquakes and volcanic activity because it lies on the so-called Pacific “Ring of Fire,” a seismically active arc of volcanos and fault lines in the Pacific Basin. A magnitude 7.7 quake killed nearly 2,000 people and collapsed buildings and houses in the northern Philippines in 1990.

The COVID-19 vaccine developed by Moderna and the National Institutes of Health caused very few cases of severe allergic reactions during the first three weeks of its administration across the country, according to a new report from the Centers for Disease Control and Prevention.

Among 4,041,396 doses given over 21 days, a total of 10 cases of anaphylaxis were confirmed by CDC investigators. Another four cases of possible anaphylaxis are still being investigated.

A federal judge on Sunday blocked the release of a Tennessee man who authorities say carried flexible plastic handcuffs during the riot at the U.S. Capitol earlier this month.

U.S. District Judge Beryl A. Howell for the District of Columbia set aside an order by a judge in Tennessee concerning the release of Eric Munchel of Nashville. Howell stayed the lower court's order pending a review.

A growing number of Republican senators say they oppose holding an impeachment trial, a sign of the dimming chances that former President Donald Trump will be convicted on the charge that he incited a siege of the U.S. Capitol.

House Democrats, who will walk the impeachment charge of “incitement of insurrection” to the Senate on Monday evening, are hoping that strong Republican denunciations of Trump after the Jan. 6 riot will translate into a conviction and a separate vote to bar Trump from holding office again. But GOP passions appear to have cooled since the insurrection, and now that Trump's presidency is over, Republican senators who will serve as jurors in the trial are rallying to his legal defense, as they did during his first impeachment trial last year.

‘This is the time’: Rep. Mike Levin on Biden administration’s immigration reform