Investigators have released an audio clip of the voice of a suspect in the deaths of two Indiana teenagers.

Indiana State Police Capt. Dave Bursten played the clip during a Wednesday news conference. He said it came from a video on the cellphone of victim Liberty German, who had the presence of mind to make the recording.

Though difficult to understand, police said the voice is saying, "Down the hill."

During the news conference. Sgt. Tony Slocum said the search continued for a man seen in a photo. Investigators revealed that the photo also came from Liberty German's phone.

"We are actively looking for this person. This person is our suspect," Slocum said.

Police said they are withholding some information in the case for investigative purposes.

Investigators believe the girls met the suspect in a chance encounter or the person knew they were going to be there. Liberty German's decision to make a recording provided police with their best information.

"This young lady is a hero, no doubt," Slocum said. 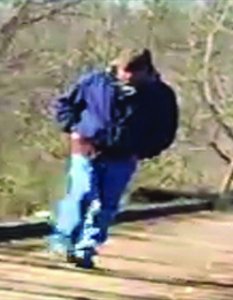 The bodies of the two teens were discovered along the edge of Deer Creek in Delphi which is about a half-mile away from the Monon High Bridge, an abandoned rail bridge over Deer Creek that was the last place the two girls were seen.

They were supposed to meet with family members later Monday evening, but when the teens didn’t show up, their families called police.

"Why Libby? Why Abby? Why Delphi? Why Carroll County?" Carter asked struggling to control his emotion. He revealed that he'd talked to Gov. Eric Holcomb about the case.

"We're not stopping ... someone knows who this individual is," Carter said.

He and other investigators again appealed to the public to continue to send in tips. He believes someone knows the man in the photograph.

"Libby and Abby need you. Please don't rationalize tips away," he said.

He also had a message for the killer.

"If you're watching, we'll find you," Carter said.

Officials are asking anyone who may have taken pictures in the area or was just on the trail to contact authorities immediately.

Anyone with information about this case is encouraged to call the Delphi Homicide Investigation Tip Line at 844-459-5786. Information can also be reported by calling the Indiana State Police at 800-382-7537, or the Carroll County Sheriff’s Department at 765-564-2413.

Information can also be emailed to Abbyandlibbytip@cacoshrf.com.

The Indiana State Police, the FBI, and the Carroll County Sheriff’s Department have announced a reward of up to $41,000 in the case, depending upon the value of the information provided.

With coronavirus restrictions forcing bars and restaurants to seat customers outside in the dead of winter, many are scrambling to nab erratic supplies of propane that fuel space heaters they’re relying on more than ever to keep people comfortable in the cold.

It's one of many new headaches — but a crucial one — that go with setting up tables and tents on sidewalks, streets and patios to comply with public health restrictions.

Guatemalan soldiers blocked part of a caravan of as many as 9,000 Honduran migrants Saturday at a point not far from where they entered the country seeking to reach the U.S. border.

The soldiers, many wearing helmets and wielding shields and sticks, formed ranks across a highway in Chiquimula, near the Honduras border, to block the procession of migrants.

National Guard troops from around U.S. continue to pour into D.C. for inauguration security

By the busload and planeload, National Guard troops were pouring into the nation's capital on Saturday, as governors answered the urgent pleas of U.S. defense officials for more troops to help safeguard Washington even as they keep anxious eyes on possible violent protests in their own states.

Military leaders spent chunks of Thursday evening and Friday calling states in an unprecedented appeal for more National Guard troops to help lock down much of the city in the days before President-elect Joe Biden's inauguration. In dribs and drabs, governors responded, some agreeing to send an extra dozen, 100 or even 1,000, while others said no.

Dr. Dre back home after being hospitalized in L.A. for possible brain aneurysm