A 9-year-old boy in North Carolina said he was fat-shamed and left in tears by a local Santa Claus after sharing his Christmas wish list over the weekend. 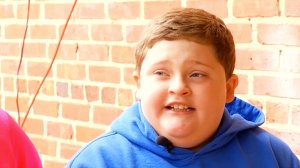 Anthony Mayse went to the mall in Forest city with his family because his mother wanted to get the family into the Christmas spirit, television station WLOS reported.

“This year we thought it’d be fun to take the carriage ride and let the kids ice skate and go see Santa,” Ashley Mayse told WLOS.

After he sat on Santa’s lap and asked for an iPod Touch and a drone, Anthony Mayse said Santa told him to “Lay off the hamburgers and French fries.”

Anthony Mayse told the station he felt awful about the comment and began to cry.

“What set me off is when he started crying,” Ashley Mayse told WLOS.

Anthony Mayse was so upset by the encounter he ended up throwing away his picture with Santa.

“It affected me so bad that I was crying until I went to bed that night,” Anthony said. “And I want to say to him, ‘You don’t want to disrespect a 9-year-old. Even though what shape and size you are, it doesn’t matter,'” Ashley Mayse told WLOS.

The Santa later apologized to Mayse family, but it was unclear if he faced any disciplinary action.

Ashley Mayse believes the Santa should be fired.

“I’m hoping he’s fired, because I don’t want any kid feeling like he did Saturday,” she told the station. “I mean, it destroyed him.”

Big Oil lost a pair of court battles Tuesday that could lead to trials in lawsuits by California cities and counties seeking damages for the impact of climate change.

The 9th U.S. Circuit Court of Appeals rejected arguments by energy companies and ruled state courts are the proper forum for lawsuits alleging producers promoted petroleum as environmentally responsible when they knew it was contributing to drought, wildfires, and sea level rise associated with global warming.

The Justice Department has closed investigations into stock trading by Sens. Dianne Feinstein of California, Kelly Loeffler of Georgia and Jim Inhofe of Oklahoma, according to people familiar with notifications sent to the senators. The senators came under scrutiny for transactions made in the weeks before the coronavirus sent markets downhill.

The developments indicate that federal law enforcement officials are narrowing their focus in the stock investigation to Sen. Richard Burr, R-N.C, the former Senate Intelligence Committee chairman. Agents showed up at his Washington-area home about two weeks ago with a warrant to search his cellphone.

The NHL will abandon the rest of the regular season and go straight into the playoffs with 24 teams instead of 16 — if it is able to resume play.

The decision, announced Tuesday by Commissioner Gary Bettman, is no guarantee that games are coming back. The NHL and the NHL Players’ Association must still figure out health and safety protocols and solve other issues.

Chino, Avenal prisons will test all employees for coronavirus after rise in cases, deaths

Google plans to reopen some of its offices in July

Dodgers cut employees’ pay up to 35% to avoid furloughs, layoffs

Chino, Avenal prisons will test all employees for coronavirus after rise in cases, deaths