From the Vatican to the U.S. Congress and campaign trail, expressions of anguish, empathy and outrage poured out Wednesday over the photos of a migrant father and young daughter who drowned while trying to cross the Rio Grande from Mexico to enter the United States without legal permission.

The photos show the bodies of the man and his 23-month-old daughter lying face down near the river bank. Her arm was draped around his neck, suggesting she clung to her father in their final moments. The photos published by the Mexican newspaper La Jornada were distributed worldwide by The Associated Press.

Oscar Alberto Martinez Ramirez and daughter Valeria were fleeing from El Salvador, which is wracked by violent crime. The mother, Tania Vanessa Avalos, was still on the Mexican side of the river and survived. 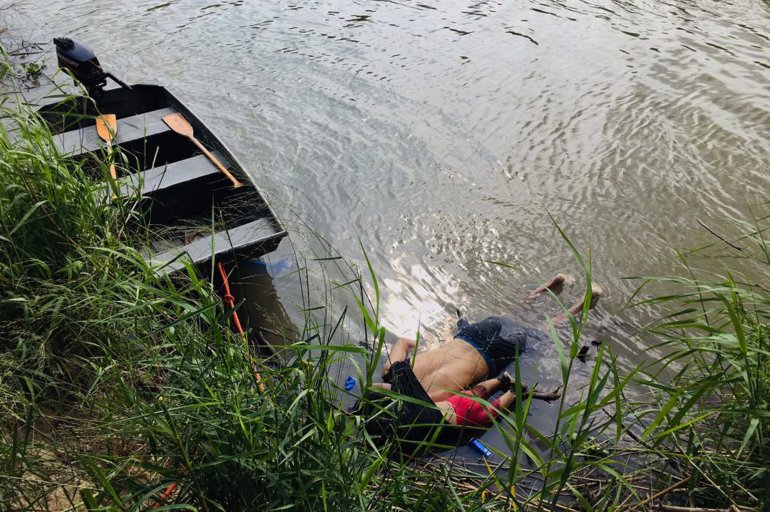 The bodies of Salvadoran migrant Oscar Martinez Ramirez and his daughter, who drowned while trying to cross the Rio Grande – on their way to the U.S. – in Matamoros, Tamaulipas, on June 24, 2019. (Credit: STR/AFP/Getty Images)

Some of the reaction:

Pope Francis saw the photos and was deeply saddened, a Vatican spokesman said.

“With immense sadness, the Holy Father has seen the images of the father and his baby daughter who drowned in the Rio Grande River while trying to cross the border between Mexico and the United States,” said the Vatican’s interim spokesman, Alessandro Gisotti.

“The pope is profoundly saddened by their death, and is praying for them and for all migrants who have lost their lives while seeking to flee war and misery,” Gisotti’s statement added.

President Donald Trump said he was disturbed by the images. But he said the deaths could have been prevented and castigated Democrats for failing to pass legislation he claimed would stop people from trying to make the dangerous trek.

“If we had the right laws, that the Democrats are not letting us have, those people, they wouldn’t be coming up. They wouldn’t be trying,” the president said. “They can change it very easily so people don’t come up and people won’t get killed.”

Congress’ top Democrats said they hoped the photos would challenge the Trump administration’s conscience while pressuring the president to ease his efforts to make it harder for people to enter the U.S. A top Republican said the photos should stir Congress to address the crisis on the border.

“This isn’t who we are as a country. We have obligations to humanity that are being completely ignored,” House Speaker Nancy Pelosi, D-Calif., told The Associated Press in a brief interview.

Senate Minority Leader Chuck Schumer suggested that Martinez and his daughter might not have died had Trump agreed to Democratic efforts to help migrants fleeing Central American countries to enter the U.S. as refugees.

“How could President Trump look at this picture and not understand that these are human beings fleeing violence and persecution, willing to risk a perilous, sometimes failed journey in search of a better life?” Schumer, D-N.Y., said on the Senate floor.

Republican Sen. Ron Johnson of Wisconsin, the chairman of the Homeland Security Committee, opened a hearing Wednesday saying the photo should propel Congress to act.

“I don’t want to see another picture like that on the U.S. border,” Johnson said.

The head of the United Nations’ children’s agency said the “the heart-rending photo … is a stark reminder of the perils facing migrants trying to reach the U.S.”

UNICEF Executive Director Henrietta Fore said, “It is a searing image that should shake each of us to our core.”

Fore expressed deep concern for the well-being of migrant children at the U.S.-Mexico border, saying some are being sheltered in “grim” facilities. She added that this is hard to fathom in the United States which has “such a rich history as a champion for children in need around the world.”

The photos also spurred many of the Democratic presidential candidates to criticize U.S. immigration policy.

“Trump is responsible for these deaths,” former Texas Rep. Beto O’Rourke said in a tweet that included a link to the photo.

Pete Buttigieg, the mayor of South Bend, Indiana, said the country needs to summon the political will to fix the immigration system. “If you can look at a picture like that and say that it is acceptable to continue doing what we’ve been doing, then I just don’t understand,” he said on MSNBC.

Sen. Bernie Sanders of Vermont said on Facebook: “This is horrific. Trump’s policy of making it harder and harder to seek asylum_and separating families who do_is cruel, inhumane and leads to tragedies like this. We must stop the deaths. We must restore humanity to our immigration system.”

When the Trump administration required nursing homes to report their COVID-19 cases, it also promised to make the data available to residents, families and the public in a user-friendly way.

But some facilities that have had coronavirus cases and deaths turn up as having none on Medicare's COVID-19 nursing home website. Those data may be incomplete because the reporting requirements don't reach back to the start of the pandemic. Numbers don't necessarily portray the full picture.

The U.S. Supreme Court handed another setback to the Keystone XL oil sands pipeline from Canada on Monday by keeping in place a lower court ruling that blocked a key environmental permit for the project.

Canadian company TC Energy needs the permit to continue building the long-disputed pipeline across U.S. rivers and streams. Without it, the project that has been heavily promoted by President Donald Trump faces more delay just as work on it had finally begun this year following years of courtroom battles.

The words and phrases permeate nearly every aspect of our society.

"Master bedrooms" in our homes. "Blacklists" and "whitelists" in computing. The idiom "sold down the river" in our everyday speech.

2 children wounded, man in critical condition after shooting near Gardena

‘It’s me’: Phillipa Soo of ‘Hamilton’ shares heartwarming video of child’s reaction to show why representation is important

North Korea rejects talks with U.S. ahead of American envoy’s visit to Seoul

As more people go out, nearly 50% of coronavirus cases in L.A. County are among those 40 and under

2 children wounded, man in critical condition after shooting near Gardena