A manhunt is still underway for a registered sex offender and parolee who led police on an hours-long car chase Tuesday in his motor home with two of his young children on board, authorities said. 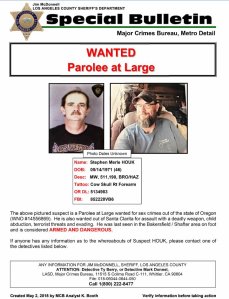 Officials said that Houk is a wanted man in Oregon, where he is registered as a sex offender. In 2002, Houk was convicted of sodomy and sexual abuse, according to records from the Oregon Judicial Department. The 46-year-old is sought in Santa Clarita for assault with a deadly weapon, child abduction, terrorist threats and evading authorities.

Houk was involved in a dispute with his wife earlier Tuesday before escaping from authorities on foot after his motor home got stuck in an almond orchard in a rural area north of Bakersfield.

Read the full story on LATimes.com.

SoCal man accused of killing wife hired 'spellcasters' to hex her before she vanished: Affidavit

The husband of Maya Millete was in a "desperate, frantic, unbalanced mindset" in the months leading up to her disappearance, a key investigator writes in the most detailed account yet of the Chula Vista man's behavior before the suspected homicide, KTLA sister station KSWB in San Diego reports.

Larry Millete was arrested Tuesday in a San Diego suburb following nine months of a high-profile investigation. The detailed depiction of him comes in an affidavit from Detective Jesse Vicente, a 15-year veteran of Chula Vista Police Department who works in the Crimes of Violence Unit.

Woman who refused to wear mask at O.C. market convicted of trespassing

In an unusual move, Orange County prosecutors took her to trial.

Coronavirus infections led to the shutdown this week of a campus in Los Angeles County, the first such closure since school opened in the fall — and a situation that also led to the quarantine of a rival high school football team.

View Park Preparatory High School, an independent charter school authorized by the L.A. Unified School District, has shuttered its campus for the entire week, returning to remote learning out of an abundance of caution, according to the charter’s senior administrator.

VA says it will house homeless veterans camped outside its West L.A. campus

U.S. has donated 200 million COVID shots to help vaccinate rest of the world

Passengers aimed cellphones in direction of woman being raped on train, but no one called 911: Police

Alleged DUI driver unhurt after crash that totaled her vehicle on O.C. freeway

SoCal man accused of killing wife hired 'spellcasters' to hex her before she vanished: Affidavit

Woman who refused to wear mask at O.C. market convicted of trespassing