The only member of the Pittsburgh Steelers to take the field for the anthem now says he regrets his actions and apologized to his teammates and coach Monday. 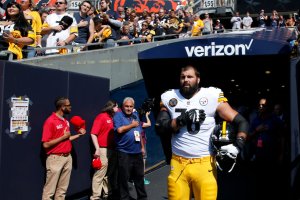 Alejandro Villanueva, a Steelers lineman and U.S. Army veteran, was pictured standing alone before Sunday’s game during the national anthem while the rest of the team refused to take the field in protest. His stand has made his jersey one of the top sellers in the NFL.

“Unfortunately I threw my teammates under the bus, unintentionally,” Villanueva said in a press conference Monday. “Every single time I see that picture of me standing by myself I feel embarrassed.”

The team had apparently agreed to stay in the tunnel Saturday evening, but Villanueva made a last-minute decision to leave the tunnel without telling his teammates, according to local TV station WPXI. He apologized for breaking ranks without giving others the opportunity to join him.

Villanueva said his team would have supported him if they had known about the “extreme circumstances” he was going through before the game. Villanueva said he had soldiers and wounded veterans texting him to make sure he would take the field. He said the fact that they were about to play at Soldier Field also influenced him.

According to WPXI, quarterback Ben Roethlisberger and defensive lineman Cam Heyward wanted to join him in solidarity, but were blocked by congestion in the tunnel before the anthem. Villanueva confirmed that report Monday, according to the station.

Villanueva, who has been celebrated widely by those who aren’t in favor of NFL players kneeling in protest, said he feels bad that his action broke an appearance of unity among the Steelers.

“I’ve made the Steelers look bad, and that is my fault and my fault only,” Villanueva said. He also apologized to coach Mike Tomlin and the rest of the team.

Dr. Anthony Fauci is back.

In truth, the nation’s leading infectious-diseases expert never really went away. But after enduring nearly a year of darts and undermining comments from former President Donald Trump, Fauci now speaks with the authority of the White House again.

Paul Chavez had no idea where a sculpture of his father, Latino American civil rights and labor leader Cesar Chavez, would end up in the White House.

He agreed just this week to lend the bronze bust to President Joe Biden and hustled to get it wrapped up and shipped across the country from California. It was an utter surprise Wednesday when he saw Biden at his desk in the Oval Office, with the bust of the late Cesar Chavez right behind the president.

The Biden administration announced Thursday a 60-day suspension of new oil and gas leasing and drilling permits for U.S. lands and waters, as officials moved quickly to reverse Trump administration policies on energy and the environment.

The suspension, part of a broad review of programs at the Department of Interior, went into effect immediately under an order signed Wednesday by Acting Interior Secretary Scott de la Vega. It follows Democratic President Joe Biden’s campaign pledge to halt new drilling on federal lands and end the leasing of publicly owned energy reserves as part of his plan to address climate change.