Feeling like it’s been hotter than ever this year? 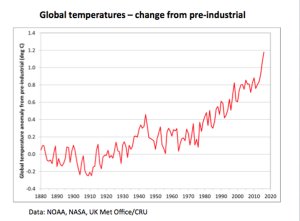 You’re not imagining things, according to the United Nations weather agency. The World Meteorological Organization said Monday that 2016 will “very likely” be the hottest year on record and blamed climate change for the growing frequency of extreme weather events.

Yes, we’ve heard this before. But this latest report comes at a crucial time, less than a week after US voters elected Donald Trump to be the country’s next president.

Environmentalists, scientists and world leaders are meeting this week in Morocco for the latest round of climate talks. And with Trump scheduled to take the reins in January, many of them are bracing for a fight.

The tycoon and reality TV star has described climate change as a hoax and promised to pull out of the international climate deal reached in Paris last year.

This much is clear: With Trump heading for the White House, political debates over the issue are very unlikely to cool down any time soon.

“‘Once in a generation’ heatwaves and flooding are becoming more regular,” said Petteri Taalas, the agency’s secretary-general.

Among the report’s findings:

• Arctic sea ice levels remain very low, and there was “significant and very early melting” of the Greenland ice sheet

If 2016 does indeed set a new record, 16 of the 17 hottest years on record will have been in this century, the agency said.

Three women appeals court judges, all conservatives recently appointed to the bench, are among President Trump’s leading candidates to replace the late Supreme Court Justice Ruth Bader Ginsburg, according to people familiar with the selection process.

Trump over the weekend said he would tap a woman to replace Ginsburg, a liberal lion, whose death Friday threw the final weeks of a divisive presidential campaign into further turmoil as the president and the Republican Senate majority leader, Mitch McConnell of Kentucky, pledged to fill the seat as soon as possible.

A humpback whale has found its way back to sea weeks after it apparently got lost in a murky, crocodile-infested river in northern Australia.

There have been no previous recorded sightings of whales in remote East Alligator River, and no one can explain why a blue water mammal ventured so deep inland.

A woman suspected of sending an envelope containing the poison ricin, which was addressed to White House, has been arrested at the New York-Canada border, three law enforcement officials told The Associated Press on Sunday.

The letter had been intercepted earlier this week before it reached the White House. The woman was taken into custody by U.S. Customs and Border Protection officers at the Peace Bridge border crossing near Buffalo and is expected to face federal charges, the officials said. Her name was not immediately released.