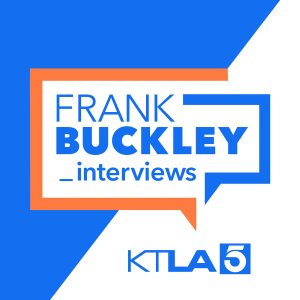 On this podcast, you’ll find interviews with people who interest host Frank Buckley. Some guests are newsmakers and celebrities — the kind of people Frank and his colleagues often interview on the KTLA Morning News.

But Frank will also interview technologists, tastemakers, athletes, artists, authors, entrepreneurs and everyday people. You may find these talks different from what you’ve come to expect from our morning news program.

Unlike on live television, these interviews won’t be limited by time — so Frank will ask people to reveal more of themselves. And he’ll talk to them not just about what they’re doing now, but how they got there. What drives them? Who inspires them? Why do they do what they do?

Frank has been interviewing people since he started his journalism career at age 17 at his hometown radio station in Twentynine Palms, California. Since then, he’s traveled the world, covering presidents and popes, disasters and wars, politics and riots, and everything in between.

Frank is also a dad, a husband and a member of his Southern California community, and he’ll bring all of that to bear in this podcast.