Skip to content
Breaking News
Breaking News
Kelly Preston, ‘Jerry Maguire’ actress and wife of John Travolta, dies at 57
Live Now
Live Now
KTLA 5 Sports Final
This is an archived article and the information in the article may be outdated. Please look at the time stamp on the story to see when it was last updated. 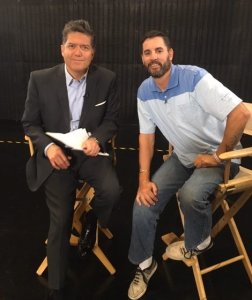 Jason Coffman is the father of the late Cody Coffman, 22, who was shot and killed during the mass shooting at the Borderline Bar and Grill in Thousand Oaks, California on November 7, 2018. He was one of 12 innocent people (link below) who were killed by a gunman who entered the venue on “College Country Night” and began shooting. His motive remains unknown.

During this podcast, Jason tells us how special his son was, he discusses the horror of living through the events of that night and the following morning, and how he has managed to move forward in the days since. Jason also reveals the sympathy he has for the mother of the shooter and his hopes to speak with her.

Alan Zweibel is one of the original writers of Saturday Night Live, the co-creator and producer of It's Garry Shandling's Show, and a consulting producer on Curb Your Enthusiasm among many other credits. Alan is also a playwright whose theatrical works include his collaboration with Billy Crystal on the Tony Award-winning 700 Sundays and Bunny, Bunny: Gilda Radner, A Sort of Love Story. He is the author of numerous books including Lunatics (co-authored with Dave Barry), and The Other Shulman (for which he won the Thurber Prize for American Humor). His new book Laugh Lines: My Life Helping Funny People Be Funnier is available as an audio book later this month. Alan's next film project is a screenplay he co-authored with Billy Crystal, Here Today, which Crystal is directing and will star Tiffany Haddish.

During this podcast, Alan discusses his career as a writer and reveals what it was like to work on SNL in the show's first years including with Gilda Radner with whom he was in love. He talks about why he and Garry Shandling stopped speaking for years after the end of their collaboration, and he also takes us inside his longtime friendship and collaboration with Billy Crystal.

This week, we revisit a conversation with the Bernie Taupin. Taupin is Elton John's longtime songwriting partner and wrote the lyrics to most of the songs you've heard Elton John sing. The friendship and professional relationship between Bernie taipan and Elton John is chronicled in the film "Rocketman."

Last summer, Bernie was in town to open an art exhibition in Beverly Hills at Gallery Michael. Bernie's artwork features the American flag. Bernie Taupin, despite his British upbringing, says he is a patriotic American. He was influenced by American music and culture growing up. He wants to make sure Americans don't forget American music legends like Woody Guthrie, Jimmy Martin, and Muddy Waters.

On this episode of the podcast, we revisit a 2017 conversation with Jorge Reyes Salinas, who at the time was a Cal State Northridge grad student serving on the California State University Board of Trustees. Jorge is also an immigrant from Peru who was brought to the U.S. as a child by his parents who never returned home when their tourist visas expired. Jorge and his parents became undocumented immigrants living in the U.S. without legal status, fearing that one day they might be deported back to Peru.

Jorge is one of more than 700,000 young people in the U.S. who were brought to this country as children and raised as Americans. In 2012, President Obama ordered that these young people receive protection from deportation under the Deferred Action for Childhood Arrivals program or DACA. In September 2017, President Trump announced that he was rescinding DACA but he gave Congress six months in which to come up with a plan to protect dreamers like Jorge. However, in June 2020, the Supreme Court of the United States announced its decision to reject DHS’s move to rescind the Deferred Action for Childhood Arrivals program.