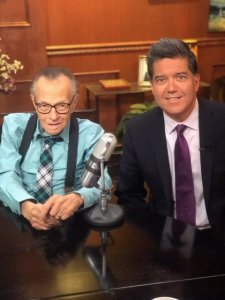 Larry King is a talk-show host who currently appears on Ora.Tv and Hulu hosting Larry King Now and PolitiKING with Larry King. He began his career on radio in Miami in the 1950s and became nationally known as the host of the Mutual Broadcasting System’s overnight radio program The Larry King Show which launched in 1978. From 1985-2010, he hosted Larry King Live on CNN.

During this podcast, Larry discusses his life and career and reveals that after a stroke in March, he considered suicide. “I thought I was just going to bite the bullet. I didn’t want to live this way,” Larry King told Frank Buckley Interviews.”I didn’t want to live dependent on others. I’ve had a full career. There is nothing I could add to it except just to do more. And I thought…I don’t know how to commit suicide. How do you commit suicide?” Larry also talks about what inspired him to keep going and about who he looks forward to interviewing in the year ahead.

Another full closure of 210 freeway starts next Wednesday

Less pain at the pump, more at the grocery store

Is the McPlant burger dead?

Can you catch monkeypox from surfaces?