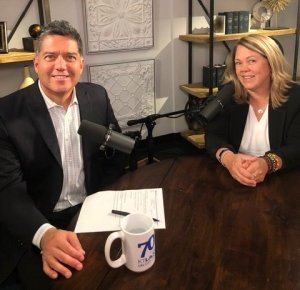 Kimmy Chedel’s late husband Frank Doyle, 39,  was the head of equity trading at a firm in the World Trade Center’s south tower on September 11, 2001. He was on the 89th floor when the tower was hit by United Airlines Flight 175 which had been hijacked by terrorists. Frank died when the south tower collapsed. Kimmy lost her husband and their children Zoe, 2, and Garrett,1, lost their father. In the wake of Frank’s death, Kimmy created Team Frank in 2002 to honor him through a series of athletic events and challenges. In 2017, Team Frank Africa was created to build pre-schools in remote areas of Africa.

During this podcast, Kimmy Chedel discusses the events of 9/11 and how she experienced it, she reveals what kept her going after that horrible day, and how it was important that her children learned about who their father was. Kimmy also tells us why it was so important for her to create Team Frank and Team Frank Africa.

Gabriel "Fluffy" Iglesias is one of the world’s most successful comedians. He has performed sold-out stadium shows around the world and now stars in his own Netflix series "Mr. Iglesias," which is currently in its second season. In this episode of Frank Buckley Interviews, Gabriel opens up about his career in comedy, including some of the health & emotional issues that led him to abruptly end a national tour in 2017. He reveals how he came out on the other side of those issues, and the joy of working on "Mr. Iglesias" and other creative projects.

51 years ago on July 20th, 1969, Neil Armstrong became the first man on the moon. He was the first of only 12 human beings to ever step on the surface of the moon. Among those 12 men is Charles Duke. Duke was an astronaut on Apollo 16, and the youngest person to ever walk on the lunar surface at the age of 36. During the first mission to the moon, Apollo 11, Charlie Duke was the voice of Houston's Mission Control, serving as CAPCOM. His was the first voice from earth to reach the moon after the Eagle had landed at Tranquility Base. Charlie shares the tense moments leading up to that first moon landing, and also recalls his own experiences on the lunar surface for Apollo 16.

July is a month designated as National Culinary Arts Month. It's a month set aside to recognize the creativity and hard work of cooks and chefs. There is perhaps no one who appreciated them more than the late Jonathan Gold of the Los Angeles Times, the Pulitzer Prize-winning restaurant critic who helped put L.A. on the culinary map. Gold died in July of 2018. This week on the podcast, we remember Jonathan Gold by revisiting a conversation from 2016. Gold celebrated food and the people who made and served it with humanity.

5 years after police feared he had been killed, missing man found living in dense woodland in England

LAPD officer among dozens seen without masks or social distancing at party for first responders at Hollywood bar: Report

LAPD officer among dozens seen without masks or social distancing at party for first responders at Hollywood bar: Report

With classes set to resume in 2 weeks, LAUSD releases plans for start of new school year

Surge of coronavirus slowing in California, but immediate reopening of businesses isn’t likely

5 years after police feared he had been killed, missing man found living in dense woodland in England