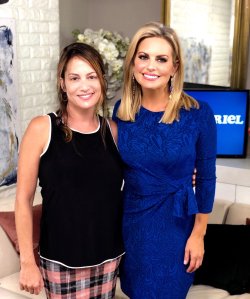 Keepin’ It Friel this week is Anna David, a NY Times best-selling author of 8 books, publisher, TV commentator, and recovery advocate.  Anna recently celebrated 19 years clean from drugs and alcohol.  She hit rock bottom after being holed up in her apartment for weeks with her cats, doing cocaine.

Subscribe to “Keepin’ It Friel: Conversations on Recovery”: via Apple Podcasts | RSS

Federal prosecutors in R. Kelly's sex trafficking case say he had sexual contact with an underage boy in addition to girls, and the government wants jurors in his upcoming sex trafficking trial to hear those claims.

Prosecutors aired a wide-ranging raft of additional allegations — but not new charges — against the R&B star in a court filing Friday. Jury selection is due to start Aug. 9 in a New York federal court for Kelly, who denies ever abusing anyone.

Beat the summertime heat and cool off at these L.A. County splash pads

With the summer heat continuing, what do you do with your hot and cranky kids?

A surefire way to cool down kids during these sunny, sweltering days is to take them to one of the free splash pads across Los Angeles County to frolic in jets of water.

Some 160,000 people, including far-right activists and members of France's yellow vest movement, protested Saturday across the country against a bill requiring everyone to have a special virus pass to enter restaurants and mandating COVID-19 vaccinations for all health care workers.

Olympic surfing science: Weather dependent and defined by the sea

Mother quarantined during family trip after testing positive for COVID-19

Golden State Stimulus checks: When will payments go out, who qualifies and how to check the amount

At ‘epicenter of the homelessness crisis in San Pedro,’ encampment cleanups have continued despite pandemic

Beat the summertime heat and cool off at these L.A. County splash pads