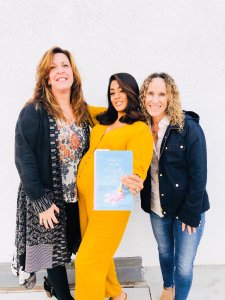 This week on “Mama Mentality,” Megan Telles is cannonballing into parenthood with two moms who have written a survival tips book for all of us. Megan is getting real-world advice from author and journalist Lisa Sugarman, and family systems therapist Debra Fox Gansenberg. Emotions run deep when the women discuss raising perfectly imperfect kids and being ok with it. And of course, stick around at the end of the episode for a word from Megan’s family matriarch, Grandma Lola!

Person killed after being struck by Amtrak train in North Hollywood

An investigation was underway Saturday after a person was struck by a passenger train in North Hollywood, the Los Angeles Fire Department reported.

Authorities responded to the report of a deceased person on or near the railroad tracks in the area of 7100 Lankershim Blvd. at 9:07 a.m., LAFD said in a news release. The person was struck by an Amtrak Pacific Surfliner passenger train, which remained at the scene.

President Joe Biden said on the fifth anniversary of a mass shooting at the Pulse Nightclub in Orlando that he will sign a bill naming the site as a national memorial.

The deadliest attack on the LGBTQ community in U.S. history left 49 people dead and 53 people wounded as “Latin Night” was being celebrated at the club. Biden said in a statement Saturday that he has “stayed in touch with families of the victims and with the survivors who have turned their pain into purpose" and described the club as “hallowed ground.”

An auction for a ride into space next month alongside Jeff Bezos and his brother ended with a winning $28 million bid Saturday.

The Amazon founder's rocket company, Blue Origin, did not disclose the winner’s name following the live online auction. The identity will be revealed in a couple weeks — closer to the brief up-and-down flight from West Texas on July 20, the 52nd anniversary of Neil Armstrong and Buzz Aldrin’s moon landing.

Person killed after being struck by Amtrak train in North Hollywood