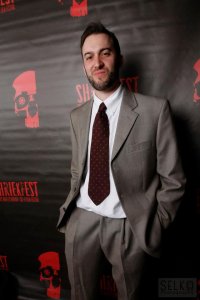 Jonathan Chance is a writer, director, comic book writer, and voice over artist from Essex, England. Jonathan’s passion for storytelling began at an early age. He and his brother developed a love for movies, and it wasn’t long before they began making their own low-budget independent films. They entered their movies in film festivals and won several awards. One of those films would lead Jonathan to California to pursue his dreams of making films, and he even found joy exploring new storytelling mediums like his voice over work and as a background actor.

He got married here, and set his sights on finally making his passion project: A feature length horror film called the Rectory about the long history of England’s most haunted house. But in the midst of experiencing some setbacks in the process of getting his movie made, Jonathan would have to face an unthinkable tragedy. His life was suddenly turned upside down and, for a time, his dream of turning his Rectory film into a reality seemed hopeless. However, rather than allow his life to turn into a real-life horror story, Jonathan chose to focus on the things that bring him joy. Now, he’s more determined than ever to share the stories he loves.