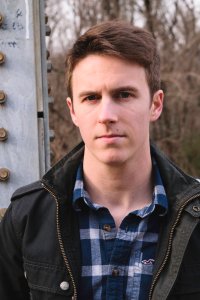 Nick Dardes is originally from the small town of Beaufort, South Carolina. He describes himself as an aspiring writer, but also says he’s the guy who is willing to do just about anything in the entertainment industry. His love for film began after watching the first Spider-Man movie in 2002. By middle school, he was making short films and by high school, even though he was shy and introverted, Nick started coming out of his shell in front of the camera. He started thinking he wanted to be an actor, but when that didn’t work out, he figured out that he really just wanted to do anything in regards to filmmaking.

But as high school was ending, Nick realized he didn’t really have a plan for his future. He started to feel stuck, but would eventually find his way into a college, and began to learn more about himself than he ever had before. Nick would later do one of the hardest things of his life: move from his small town to the big bustling city of Los Angeles. Knowing that opportunity can lie just around every corner, Nick started working towards his future in any way he could think of.

Authorities searched the home of rocker Marilyn Manson on Monday after allegations of physical and sexual abuse by several women.

Los Angeles County sheriff's Deputy Eva Jimenez said a search warrant was served on the home of Manson, whose legal name is Brian Hugh Warner. She would give no further details.

The holidays bring joy and merriment, but they can also be stressful. Find out what naughty things top the list that make people scream "Bah Humbug!"

Also, a self-proclaimed elegance coach is now making YouTube videos to teach you how to be classy. Buckle up.

An attorney hired by City Atty. Mike Feuer’s office has agreed to plead guilty to one count of bribery in a nearly $2.2-million kickback scheme arising from the Los Angeles Department of Water and Power’s 2013 billing fiasco, prosecutors said Monday.

Jackpot: SuperLotto Plus ticket worth $38 million sold in Santa Clarita

FedEx driver questioned after 300 to 400 packages 'thrown off ravine': Sheriff

L.A. businesses can now be cited for not verifying COVID vaccine proof