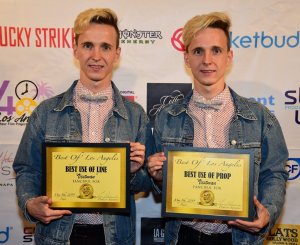 Kirill and Filipp Revega are two actors, models and social media influencers. They call themselves the “Twins from Russia.” Born and raised in a small city in Russia, the twins were recording videos of themselves and their friends at an early age. When it was time to go to university, they began studying engineering at their parent’s behest, but Kirill and Filipp always felt like they were destined for something greater outside their small Russian town. They began gaining traction on YouTube, and they eventually started modeling.

After visiting Los Angeles during a student exchange program, the twins knew it was where they wanted to be. After finishing their degree in Russia, they would finally arrive in the city that they felt would make their dreams come true. To their surprise, however, they learned that no one was going to just pluck them off the street and give them a modeling gig or a part in the next blockbuster movie. It was going to be up to them to make their own dreams come true. Instead of turning tail back to Russia, the twins doubled down, and got to work carving out their place in Hollywood.

Arrest made in Sacramento after $25,000 worth of stolen Disney memorabilia found through online auction

1 in 3 young adults vulnerable to severe COVID-19, with smoking a big part in risk: UCSF researchers

‘When you see someone getting hated on, you try and stop them’: Community rallies around fruit vendors after heated confrontation in Canyon Country

Arrest made in Sacramento after $25,000 worth of stolen Disney memorabilia found through online auction